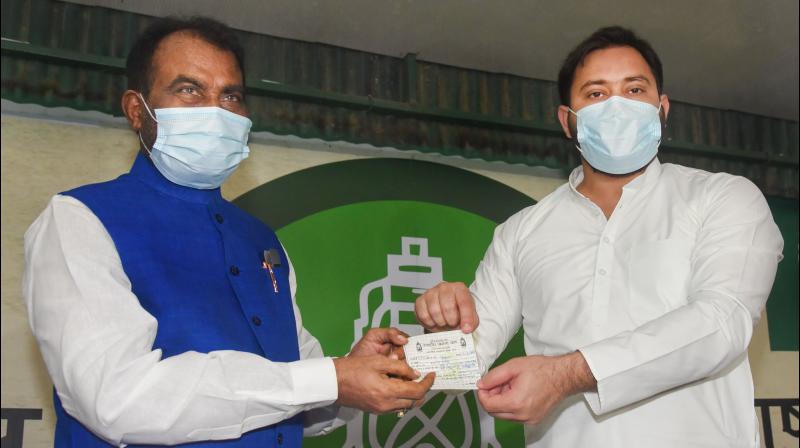 Bihar industry minister Shyam Rajak on Monday resigned from the JD(U) over differences with party leadership and joined the opposition RJD.

RJD leader Tejashwi Yadav along with other senior leaders was present during the occasion. JD(U) sources told this newspaper that he has been upset over being “marginalized” in the party and was also not getting much prominence as a minister.

“This is an emotional moment for me”, Shyam Rajak said, adding that he would continue his fight for the cause of social justice under the leadership of RJD Chief Lalu Yadav.

While criticizing Nitish Kumar government for its stand on CAA, NRC and other issues he said that “I can never compromise on my ideology and happy to join RJD”. Hinting that others in the JD(U) may quit the party ahead of polls, he said, “you will see what will happen in the coming days”.

Shyam Rajak a sitting MLA from reserved Phulwarisharif seat is considered a strong Dalit face. Political experts claim that he also has strong backing from a sizeable Muslim population in his constituency.

Reports suggest that the JD(U) had started promoting a Dalit leader Arun Manjhi from the constituency, he had been contesting assembly elections.

On Sunday, after Mr. Rajak announced his decision to quit he was expelled from the JD(U) and sacked from the ministry by the governor on the advice of Chief Minister Nitish Kumar.

Before joining the JD(U) in 2009 he was with RJD. During the Lalu- Rabri regime before 2005, he had also served as a minister.

Shyam Rajak was made the industry minister when Nitish Kumar returned to NDA fold in July 2017.

Several political parties also raised questions on the timing of his decision to quit JD(U) and join the opposition camp. BJP spokesperson Nikhil Anand told this newspaper that, “The People of Bihar are wise enough to understand who their actual well-wisher is. The socioeconomic growth of subaltern community including Dalits took place because of Nitish Kumar led NDA government's policy. The 2005 onward politics of Bihar has shown that it is not the RJD brand rhetoric of social justice but the policy initiative which has brought a big change in the lives of Dalits in Bihar. The individuals switching parties only to grab ticket without any ideological motivation will have no impact on NDA”.