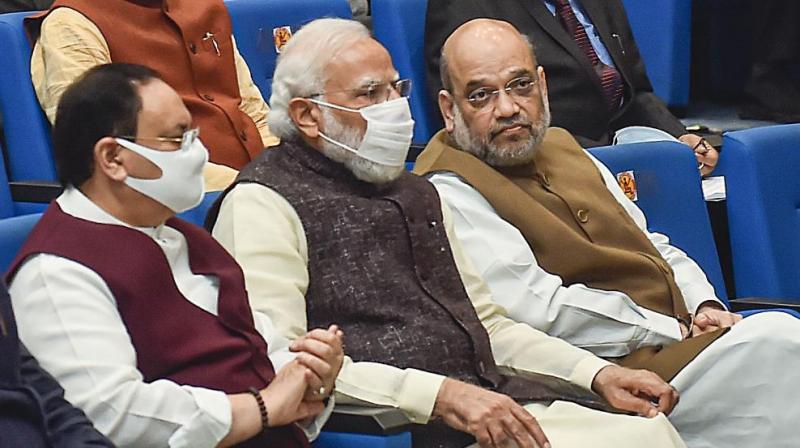 The shake-up in the organisation is being viewed as the complete consolidation of the Modi-Shah hold in the BJP. (File Photo: PTI)

New Delhi: It was a rude awakening for a section of senior BJP leaders when the high command dropped Union minister Nitin Gadkari and Madhya Pradesh chief minister Shivraj Singh Chouhan from its parliamentary board, the highest decision-making body in the party.

While Maharashtra deputy chief minister Devendra Fadnavis and senior party leader Om Mathur were inducted into the Central Election Commission(CEC), Shahnawaz Hussain, the only minority face in the CEC, was dropped. Eyebrows were also raised as Uttar Pradesh chief minister Yogi Adityanath did not find any place in the parliamentary board despite a  strong buzz about his inclusion. The entire shakeup in the organisation is being viewed as the complete consolidation of the Modi-Shah hold in the BJP.

Following the reshuffle, both the board and the CEC now have full members. While the CEC has 15 members, the highest policy-making body, the parliamentary board, has 11 members.

Shockwaves ran through the BJP old guard as both road transport and highways minister Nitin Gadkari and Mr Chouhan were dropped from the board. When contacted, some senior leaders refused to comment, and only said that “this is surprising”. Sources in the party attributed Mr Gadkari’s sudden exit from the board due to the “prevailing undercurrents” between him and the Prime Minister. It may be mentioned that Mr Gadkari’s remark during the anti-farm laws agitation that everyone has the “right to protest” apparently went against the PM’s observation on the protesters as “andolan jeevis”. Some of the senior leaders said that “Gadkariji, a high-performance minister, is perhaps the only one who takes his own decisions to run his ministry”.

The leaders felt Mr Gadkari’s “marginalisation” was now becoming more and more apparent. In 2019, he was divested of shipping and water resources, river development and Ganga rejuvenation. He was also divested from the ministry of micro, small and medium enterprises which was earlier given to him. What also reportedly went against him was a constant buzz in the saffron corridors that Mr Gadkari “was PM material”. Some felt that Mr Gadkari managed to remain afloat only because of his strong “connection with the RSS headquarters in Nagpur, also his Lok Sabha constituency”.

It may be recalled that in 2014 while Mr Modi was being propped up to be the PM face of the party, another section floated the name of Shivraj Singh Chouhan. Sources said even though Mr Chouhan was reinstalled as chief minister after the Kamal Nath-led Congress government fell in 2020, “he could never be a part of the Modi-Shah camp”. A senior party leader asserted that “unlike most of the ministers and influential leaders in the BJP today, Shivraj is a powerful mass leader and can hold a state on his own”.

After his stellar performance in the UP polls, there was a strong buzz in the party that UP CM Yogi Adityanath was all set to make it into the party’s highest policy-making body. His failure to enter the parliamentary board is also viewed as a “simmering undercurrent between him and the national leadership”. The UP CM, who too has emerged as a mass leader, was never viewed as a part of Delhi leadership. After the exit of Mr Gadkari and Mr Chouhan, the only veteran leader who continues to remain in the parliamentary board is defence minister Rajnath Singh. It may be recalled that during the tenure of Mr Shah as party president, veteran leaders L.K. Advani and Murli Manohar Joshi were gradually eased out and made members of the “Margdarshak Mandal”.

While there has been no official reaction to the shakeup yet,  some party functionaries described it as an “emphasis on diversity”. They said that the “new parliamentary board shows how the party rewards old workers and values the experience of its karyakartas”. They added: “People like BSY, Satya Narayan Jatia, K. Laxman have given their lives to the party, building it brick by brick from the start. Their coming to the highest decision-making body offers a glimpse of how the party values its esteemed karyakartas. There is evidently an emphasis on diversity. Sarbananda Sonowal is from the Northeast, and K. Laxman and B.S. Yediyurappa hail from the South. Iqbal Singh Lalpura is the first-ever Sikh in the parliamentary board.” With Muslim leaders making an exit both from the Rajya Sabha and parliamentary board, Iqbal Singh is the party’s new minority face. As for 78-year-old Mr Yediyurappa, he has been brought in ahead of the Assembly elections that lie ahead in Karnataka.