BJP-Sena fought polls together, they have to choose their path: Sharad Pawar 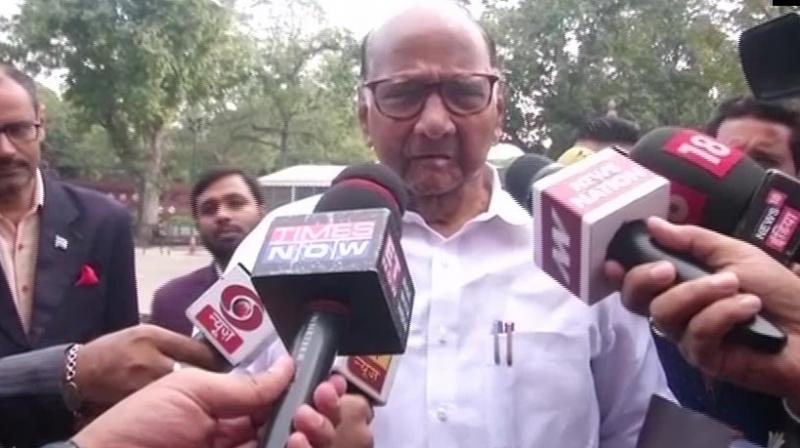 Sharad Pawar, who arrived in Delhi to meet Sonia Gandhi, made a cryptic statement on Monday. (Photo: Twitter/ ANI)

New Delhi: All may not be going to the Shiv Sena’s expectation to form the Maharashtra government after breaking ties with long-time ally the Bharatiya Janata Party (BJP).

Having knocked on Congress president Sonia Gandhi’s doors, the Shiv Sena is hoping for a three-party tie-up between the Sena, Congress and pre-poll ally the NCP.

Gandhi and NCP chief Sharad Pawar -- the canny negotiator -- have had several conversations on the viability of such an ideologically-mismatched alliance. In fact, Pawar is to meet Sonia Gandhi in Delhi on Monday evening.

But he made a cryptic statement hours before the meeting. He was asked by reporters: “Do you think the Shiv Sena-NCP-Congress government will happen?”

Reporters persisted: “But Shiv Sena is saying they will make a government along with Pawar Saheb...?” Mr Pawar's one-word response was: “Accha? (Really?)”

The Shiv Sena and the BJP, who had fought the polls together, could not form the government due to differences over power-sharing, particularly the chief minister’s post.

Sena chief Uddhav Thackeray also pulled out his party’s lone minister in the Union Cabinet to signal to the Congress, NCP that he was ready for an alliance.

Pawar has ruled out fresh elections, stating on Friday that Maharashtra would soon see a stable government. His colleague Nawab Malik also recently said the Sena would get the chief minister’s post.

Malik has said the process of forming a government needs to be accelerated as Maharashtra remains under President's Rule since last week.

A meeting between the Congress and Shiv Sena leaders will also take place.

The BJP emerged as the single-largest party in the state with 105 seats in the 288-member Assembly followed by Shiv Sena 56, NCP 54 and Congress 44.