India   Politics  18 Nov 2019  'Missing. Have you seen him?' Gambhir's missing posters in Delhi as he skips pollution meet
India, Politics

'Missing. Have you seen him?' Gambhir's missing posters in Delhi as he skips pollution meet

The meeting was ultimately called off as lawmakers and bureaucrats were absent. 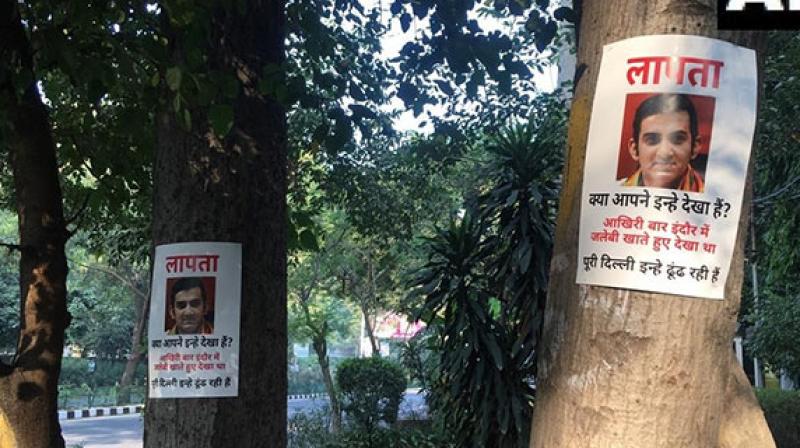 "Missing. Have you seen this person? He was last seen eating ''jalebis'' in Indore. The entire Delhi is looking for him," the message on the posters stated along with a picture of Gambhir, the Lok Sabha MP from East Delhi.

These posters cropped up after the cricketer-turned-politician skipped a meeting of the parliamentary standing committee on urban development on Friday over air pollution in the National Capital Region.

Pictures of Gambhir, who appears on sports channels for cricket commentary, enjoying ''jalebis'' in Indore on the same day also surfaced on social media.

Only four MPs of a 28-member parliamentary panel attended the key meeting to discuss the air pollution crisis in the National Capital Region. The meeting was ultimately called off as lawmakers and bureaucrats were absent.

Gambhir had come under attack from the ruling Aam Aadmi Party, which demanded that the East Delhi MP should quit from his post for "failing" the people of Delhi.

The parliamentarian had hit back at the AAP, saying he should be judged by his work and not by "propaganda or false narrative spread by the minions of the honest" chief minister.

Meanwhile, a close aide of the BJP MP alleged that the posters were a handiwork of the AAP that "has not been able to digest the humiliating defeat of its candidate, Atishi, at the hands of Gautam Gambhir in the Lok Sabha election."

According to Gaurav Arora, Gambhir was in his constituency till last Wednesday. He inaugurated two schools of the East Delhi Municipal Corporation (EDMC) and attended other programmes before leaving for his fixed assignment.

"The AAP and its leaders are baffled by the work done by Gambhir in a short span of five months in East Delhi after winning the election," Arora added.