The chief minister said that cost of road construction will be brought down by reusing old road material. 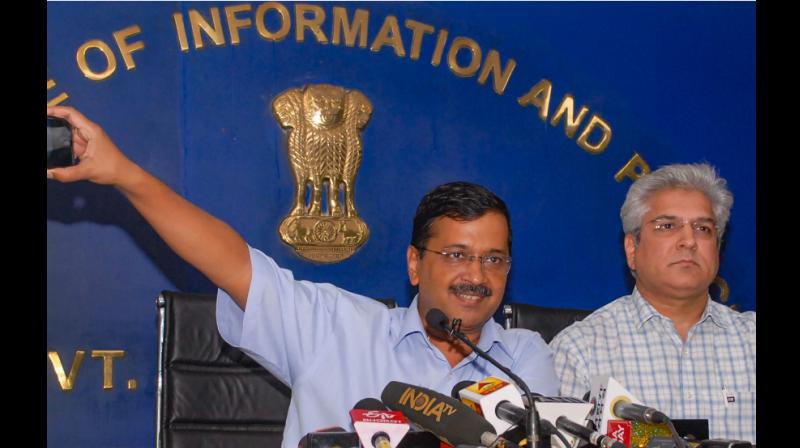 Taking a veiled dig at his Gujarat counterpart Vijay Rupani, Delhi Chief Minister Arvind Kejriwal on Sunday said that instead of buying a Rs 191 crore-plane for himself he preferred to provide free ride to women in public transport buses. (Photo: File)

New Delhi: Taking a veiled dig at his Gujarat counterpart Vijay Rupani, Delhi Chief Minister Arvind Kejriwal on Sunday said that instead of buying a Rs 191 crore-plane for himself he preferred to provide free ride to women in public transport buses.

He said that opposition parties were getting "uncomfortable" by his government's schemes for facilitating people.

"We allowed free travel to women in public transport buses and the opposition raised noise over it. People ask where did the money for it come from. The chief minister of a state bought a plane worth Rs 191 crore for himself. I did not buy a plane and instead made travel free for my sisters," Kejriwal said at Rithala here.

The women in Delhi have been allowed free travel in public transport buses by the AAP government from October 29. The move coming a few months before the Delhi Assembly polls due early next year has been criticised by the BJP as a "freebie" for political gains.

Inaugurating construction of roads in Rohini under Rithala Assembly constituency, Kejriwal said opposition parties were not happy with his government's schemes for the people. "We made 200 units of power consumption free and opposition leaders are opposing it. Their MPs get free 4,000 units free, but if a driver gets it, they are pained," he said.

The technique which will overcome the problem of uneven road surface, was available earlier but was not employed due to corruption, he said.