The Winter Session is scheduled to go on till December 13 and will provide a total of 20 sittings spread over a period of 26 days. 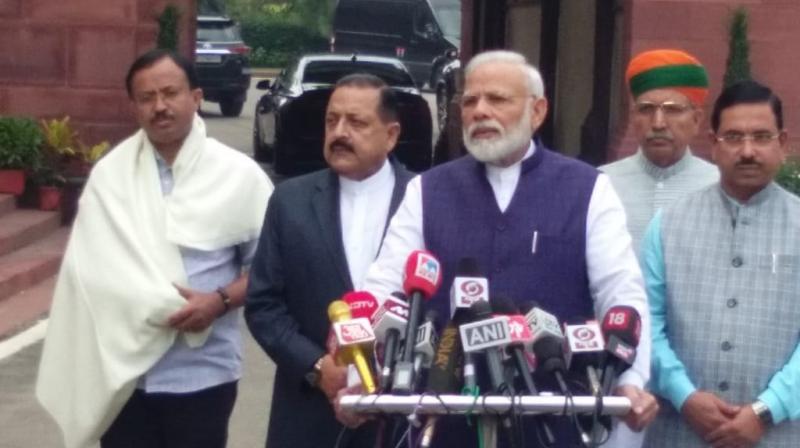 As the Winter Session of Parliament will start on Monday, the government seeks to pass more than 30 bills amid the opposition’s plan to raise the issue of the detention of political leaders in Jammu and Kashmir, a slowing economy, rising unemployment and farmers’ distress among others. (Photo: File)

New Delhi: Ahead of the Winter Session, Prime Minister Narendra Modi said he hoped for frank discussion on all the matters.

Many key bills, including the Citizenship Bill, are scheduled to be tabled in the Winter Session of the Parliament.

The Bharatiya Janata Party (BJP)-led government has officially informed Parliament that it wants to amend the Citizenship Act in the upcoming session, a move that could trigger protests by several opposition parties.

The Citizenship Bill, which the BJP seeks to pass with the aim of granting citizenship to non-Muslims from neighbouring countries like Pakistan, Bangladesh, and Afghanistan who came to India before December 31, 2014, will be taken up during the proceedings of the House.

Other key bills that are likely to be taken up during the course of the Houses include the Personal Data Protection Bill, 2019, Anti Maritime Piracy Bill 2019 and Transgender Persons (Protection of Rights) Bill, 2019 among the 47 items.

On Sunday, Prime Minister Narendra Modi in his customary remarks at a session eve all-party meeting asserted that the government is ready to discuss every issue and exhorted everyone to make the Winter session as productive as the last one, when Parliament gave its nod to the bifurcation of the then state of Jammu and Kashmir and nullifying Article 370, besides several other important bills.

A number of meetings were held ahead of the session as political leaders discussed issues they wished to debate.

The Winter Session is scheduled to go on till December 13 and will provide a total of 20 sittings spread over a period of 26 days, including four Private Members' days.

The Winter Session also marks the historic 250th session of the Rajya Sabha and will be marked through discussions and the release of a commemorative coin, postal stamp and books.

This will be the second session of the Parliament since Prime Minister Narendra Modi returned to office with a bigger majority for the second successive term.