‘The step is aimed at improving their financial condition and to waive loans of people like Vijay Mallya,’ he said. 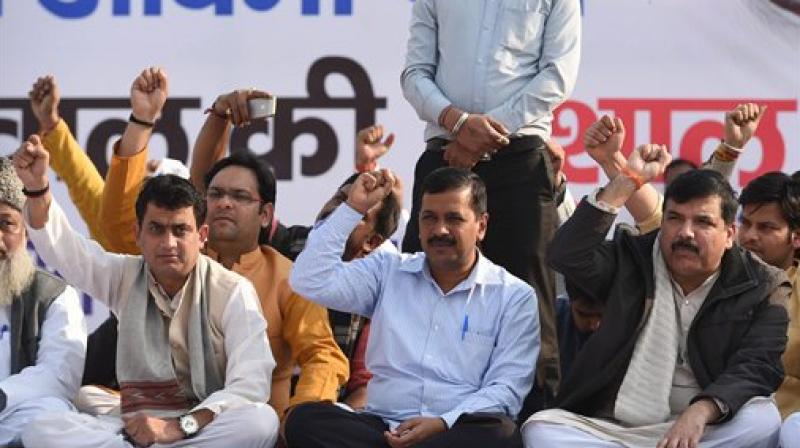 Delhi Chief Minister and AAP convener Arvind Kejriwal with party leader Sanjay Singh and others at the party rally in Lucknow. (Photo: PTI)

Lucknow: Terming demonetisation as a "conspiracy" of BJP and the Prime Minister, Delhi Chief Minister Arvind Kejriwal on Saturday said people of Uttar Pradesh, "who made Narendra Modi the PM", will now teach BJP a lesson for the "anti-people" step.

"The step is aimed at depositing money of ordinary people in banks to improve their financial condition and to waive loans of people like Vijay Mallya. It has been done to help big industrialists, who have taken loans of over Rs 8 lakh crore from banks...," the AAP leader alleged at a rally in Lucknow.

Calling the note ban as "anti-people", Kejriwal said, "People of UP, from where BJP got 73 (out of 80) Lok Sabha seats (including two of ally Apna Dal) will now teach BJP a lesson for the conspiracy."

After demonetisation, he alleged, "record corruption" was done in the country and added that "not only the step and intentions but execution was also bad".

Questioning claims of Modi that demonetisation was a step to curb black money, Kejriwal asked why not a single person was jailed when the government had a list of people who had stashed away money in foreign banks.

"If he sends two or four such persons to jail, corruption will end in the country," he said.