Hijab not essential practice of Islam: Karnataka govt to HC 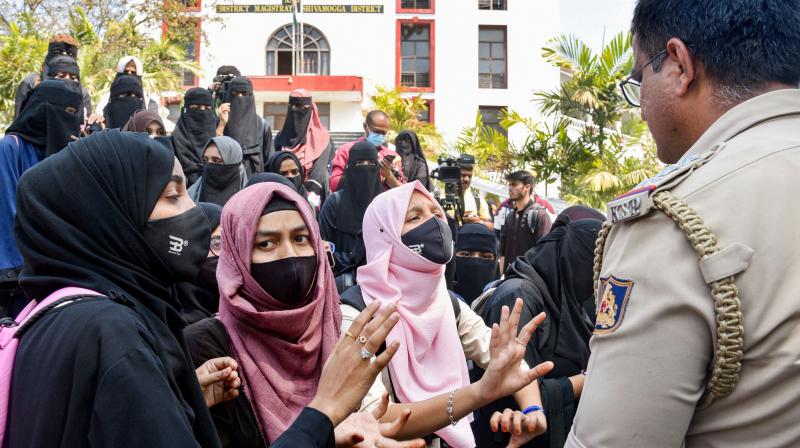 New Delhi: Defending its orders banning headscarves in classrooms, the Karnataka government on Friday argued before the three-judge bench of the Karnataka high court that wearing hijab is not an essential religious practice in Islam and preventing it does not violate the Constitutional guarantee of religious freedom.

Advocate general Prabhuling Navadgi, while arguing on behalf of the state, said that the practice of wearing hijab must pass the test of Constitutional morality and individual dignity outlined in Sabrimala verdict by the Supreme Court. He said that the state government has taken the stand that the hijab does not come under the essential religious practices in Islam and preventing its use did not violate Article 25 of the Indian Constitution, which guarantees religious freedom.

The AG further said that the state government has ordered that the students should wear uniforms prescribed by colleges and that the government does not want to intervene in religious matters.

While the arguments are set to continue on Monday, advocate Mohammed Tahir made a mention on the Interim Order saying it is causing difficulty for the Muslim community. “An Interim Order was passed considering the law and order situation. It was limited to where CDC has prescribed uniform. But even teachers are not spared. Muslim community members are facing difficulty. Every department is interpreting the order differently. Yesterday, Minority Department passed an order. Even in Urdu colleges it is enforced. Policemen are deployed at gates and are threatening Muslim girls. The order said "classroom". But at gates students are stopped,” Md Tahir said.

Responding to him, Karnataka Chief Justice said the order was very clear. AG added while the petitioner can file an application on this, he said they can give him the details and assured that he will instruct that nobody will be permitted to act beyond the order of the court.

A teacher at Jain PU College in Tumkuru resigned after she was asked not to wear hijab in the class. She said she has been teaching for three years with hijab and now she is not okay being denied her Constitutional right.

Meanwhile, a male student of a government PU college in Vijayapura district was stopped on Friday from sporting vermilion due to the Karnataka high court order. The student was stopped by the college authorities and was asked to wipe off the tilak prompting a protest by Bajrang Dal activists who staged a protest outside the college shouting slogans.