Mamata asks Modi: When Amphan hit state, where were you, BJP ? 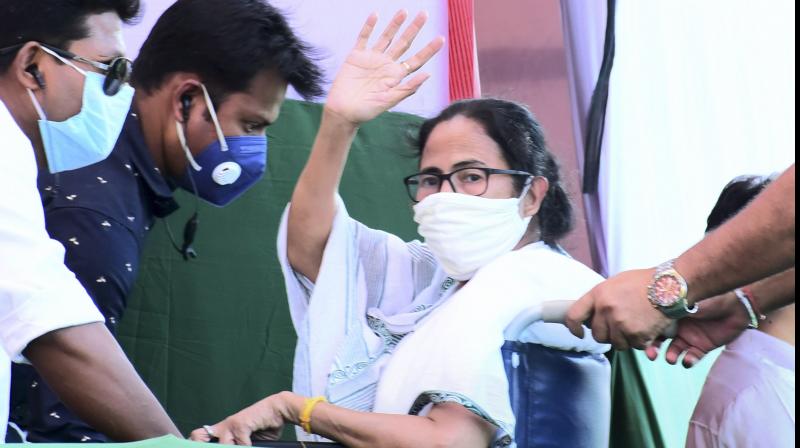 Kolkata: Hitting back at Prime Minister Narendra Modi, West Bengal chief minister Mamata Banerjee on Thursday called the BJP a party of “cash balloon” and “gas balloon”, alleging its rampant use of money power for “horse trading” and using falsehoods to fight the Assembly elections.

She also asked Mr Modi and his party to explain where they were when the state was hit by Cyclone Amphan and the Covid-19 pandemic last year. Vowing to stop the BJP from coming to power in the state, the TMC chief further urged the public not to allow any “tiger” or “snake” waiting outside to entire their homes.

“Our government always provides financial support to the public in any natural calamity or disaster. In Cyclone Amphan, people were severely hit. There were anomalies in relief distribution only in one or two cases. Otherwise, thousands of crores of funds were distributed to the affected. But where was Mr Modi and the BJP? Where were their followers?" Ms Banerjee wondered at a TMC rally at Garbeta in West Midnapore in the Jangalmahal area, at a time when Mr Modi was spewing venom on her rule from a neighbouring district Purulia.

She said: “When an election comes, they also come out with cash balloons and gas balloons of lies. They make the flow of cash, as water flows in a hose pipe, for horse trading. Whose money is it? It is yours and my money after all. All the hotels in Bengal are booked. A hundred flights have been taken on rent. Innumerable helicopters are there also. Thousands of leaders from outside are roaming around here. They are dreaming of looting votes.”

The two-time CM also tore into the BJP government at the Centre over the hikes in fuel and LPG prices. She also narrated her pain from her leg injuries to stoke public sentiments.

Ms Banerjee said: “I was in Kolkata the day before. Dressing and plaster had to be done again. I found a blood clot there. It is difficult to move my leg. Still, I have rushed here to tell you that if you find a tiger or a snake hiding at your doorstep for entry, do not allow it. When I fight, I do it like a bagher bachcha (tiger cub). But I never bow down my head to a party like the BJP which does not think about the masses.”

The TMC chief’s attack on the BJP during the intense campaign in the Jangalmahal districts, which are going to the polls on March 27, the first of eight phases, assumes significance as the saffron party has made significant inroads there since the last Lok Sabha polls in 2019.