The BJP leaders also claimed that no incident of rioting took place after he took the charge of the UP government. 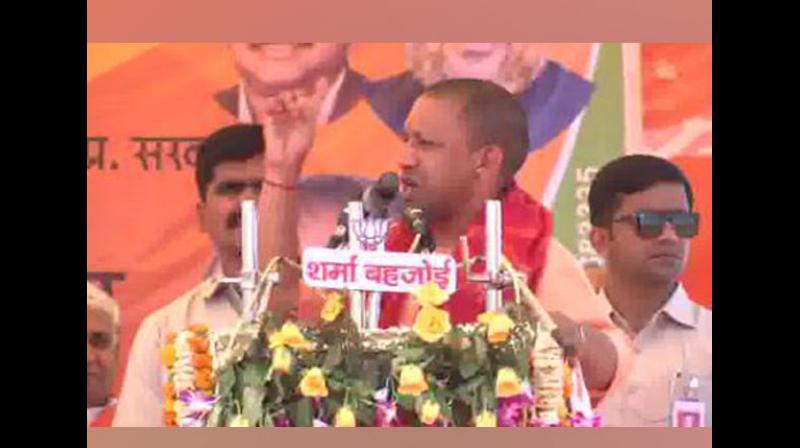 "On the one hand, there is a candidate from a party which developed places linked to Baba Bhim Rao Ambedkar and Gautam Budhha. On the other hand, there is an Opposition candidate who calls himself a 'Babar ki Aulad'," Yogi said at an election rally here.

He said, "Once I was in Parliament, I asked the SP candidate, who was also an MP, as to who were his predecessors, he said he was the successor of Babar. I was surprised."

Yogi's comments come days after the EC barred him from campaigning for 72 hours for allegedly making comments amounting to the violation of the model code of conduct. This was Yogi's first rally after the ban.

The Chief Minister said that the fight on the Sambhal Lok Sabha seat was between a candidate who believes in nationalist, pro-development candidate and a person who called himself the successor of Mughal king Babar.

In an apparent reference to the SP-BSP-RLD candidate, Yogi said: "The person who does not want to sing Vande Matram, who feels discomfort in garlanding Baba sahab, is not eligible to get your votes."

Yogi termed the alliance leaders as anti-development and anti-poor, and urged the voters not to vote in favour of the people who feel ashamed in chanting Vande Matram.

"Are you ready to hand over the country to anti-nationals, terrorists, anti-development and anti-poor people and to those who dub themselves as 'Babar ki Aulad'?" he said amid the cheering crowd.

Attacking previous SP and BSP governments in the state, he said that earlier regimes discriminated between Hindus and Muslims and claimed that he had stopped the alleged practice.

"Earlier governments discriminated between Deva Sharif and Mahadev. They sanctioned funds for Muslim cemeteries but not for Hindus. We stopped his discrimination," Yogi claimed.

The BJP leaders also claimed that no incident of rioting took place after he took the charge of the UP government.

There are around 18 lakh voters in Sambhal. Muslims constitute around 9 lakh followed by the Scheduled Caste (around 3 lakh) and Yadavas.

Sambhal goes to polls on April 23. The counting of votes will take place on May 23.