Bypolls were held in 35 Assembly constituencies in Odisha and 18 Assembly segments in Tamil Nadu. 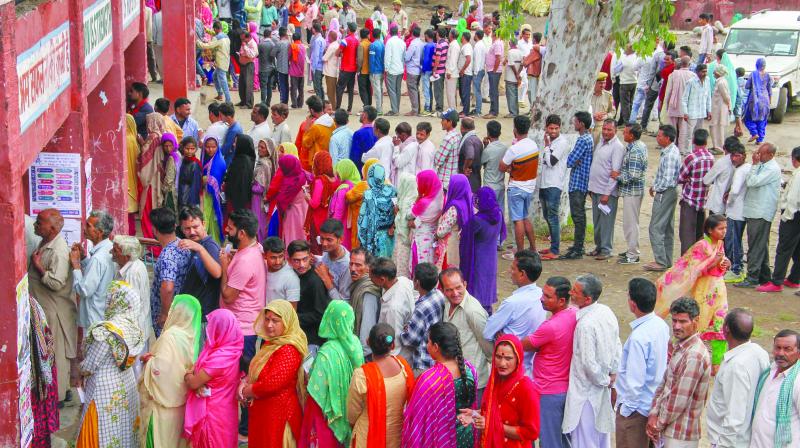 Voting in 95 seats across 11 states and Puducherry UT in the 2nd phase of LS elections were marred by an IED blast by Naxals in C’garh, police firing in West Bengal on stone pelters and EVM glitches.

New Delhi: The fate of candidates in 95 constituencies across the country were sealed as the second phase of the Lok Sabha elections ended on Thursday, in which a total of 67.84 per cent turnout was recorded.

Several instances of the malfunctioning of electronic voting machines (EVMs) were reported from across the country, including in Maharashtra, Uttar Pradesh and Karnataka.

Violence was reported from several places in West Bengal, where polling was being held in three parliamentary constituencies. The most serious incident was the attack on the car of CPI(M) candidate and sitting MP Mohammed Salim, who is up against the Congress’ Deepa Das Munshi in Raiganj.

Mr Salim claimed that the police did not do anything when his car was attacked in Islampur. His party has accused workers of the state’s ruling Trinamul Congress of being behind the attack.

In Chopra, under Darjeeling constituency, security personnel fired teargas shells and lathicharged agitators, who accused workers of the ruling party in the state of obstructing them from casting their vote. Agitators who were blocking National Highway 31 also hurled crude bombs at local police personnel and those belonging to the Rapid Action Force.

Electronic voting machines were also smashed following a clash between supporters of the Trinamul Congress and the BJP in booth number 112 in Chopra.

There were reports of an IED blast by the Naxalites in Chhattisgarh.

Over 15.80 crore voters cast their votes to decide the fate of 1,600 contestants.

Voting was also held in 35 Assembly constituencies in Odisha and in 18 Assembly seats in Tamil Nadu.

In Tamil Nadu, polling is being held in 38 of the 39 Lok Sabha seats. Polling in Vellore Lok Sabha seat was cancelled on Tuesday by the Election Commission after the recovery of huge amount of cash allegedly from an associate of a DMK leader recently.

The EC had also announced postponement of polling in Tripura (East) Lok Sabha seat to the third phase on April 23, saying the prevailing law and order situation there was not conducive for the holding of free and fair polls.

In the South, besides Tamil Nadu, polling was being held in 14 seats in Karnataka.

Ten seats went to the hustings in Maharashtra, eight in Uttar Pradesh, five each in Assam, Bihar and Odisha, three each in Chhattisgarh and West Bengal, two in Jammu and Kashmir and one seat each in Manipur and Puducherry.

Of 95 constituencies, the AIADMK holds the maximum of 36 seats, followed by the BJP, with 27 seats.

While the Congress had won 12 of these seats in 2014, the Shiv Sena and the BJD had bagged four each, the JD(S) and the RJD two each and the AIUDF, NCP, JD(U), PDP, AINRC, PMK, CPI(M) and Trinamul Congress one seat each.

The Lok Sabha polls are being held in seven phases for 543 seats. Two phases are now over and the remaining five phases are on April 23, April 29, May 6, May 12 and May 19. Counting of votes for all seats will be on May 23.