The sharp comment comes after the cricketer-turned-politician made many veiled attacks against Singh. 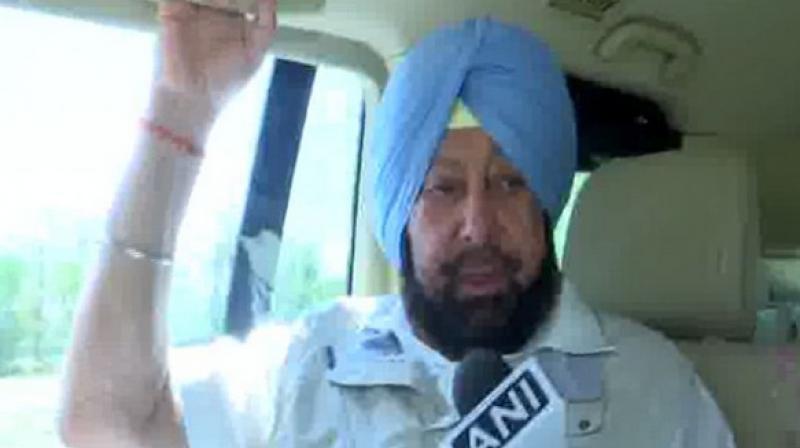 The Chief Minister said that the Congress will surely take an action against Sidhu for his alleged remarks as the party does not believe in indiscipline. (Photo: ANI)

Chandigarh: Punjab Chief Minister Captain Amarinder Singh on Sunday said that state minister Navjot Singh Sidhu wants to replace him as the head of the state government. The sharp comment comes after the cricketer-turned-politician made many veiled attacks against Singh.

The tension between the two Congressmen had also come out in the open on a few occasions in the past.

"He (Sidhu) is ambitious. Everyone has his/her own ambition. I know him since childhood. I have no difference of opinion with him. But he probably wants to become the chief minister and replace me, that is his business. But the timing, a day before the elections is wrong. The impact will be on party or on leaders contesting, not on me," Amarinder Singh told ANI when asked to respond on Congress leader and Punjab Minister Navjot Singh Sidhu's recent indirect attacks on him.

The Chief Minister said that the Congress will surely take an action against Sidhu for his alleged remarks as the party does not believe in indiscipline.

"It is now on central leadership to take a decision. So far, I have read that they have taken notice on it and they will probably take a decision after elections. Congress party does not believe in indiscipline. They will not accept damage to the party. Otherwise, you are free to say what you want but that should not damage the party," he said.

Recently, when Sidhu's wife Navjot Kaur Sidhu expressed her displeasure after being denied a ticket to contest Lok Sabha elections from Amritsar, Amarinder Singh had said that former was offered the chance to fight polls from the holy city but refused.

Responding to this, Navjot Singh backed her saying, "My wife has the courage and moral authority that she would never lie".

Another war of words broke out between the party colleagues after Amarinder Singh, widely known as "Captain", disapproved Sidhu's visit to Pakistan to attend the groundbreaking ceremony of Kartarpur Sahib Corridor on November 28 last year. He himself rejected an invite to the event due to continuing Pakistani involvement in cross-border terrorism.

Reacting to this, Sidhu had said that he considers Congress President Rahul Gandhi as his "captain". He had said that visit to Pakistan was opposed by Amarinder Singh but not the Congress party.

Sidhu's remarks at the event also created a furore back home as he not only mentioned the Rafale deal controversy in his speech but also heaped praises on Pakistan Prime Minister Imran Khan.