It is learnt the Army and other security forces are planning to launch a tough campaign against militants in the state. 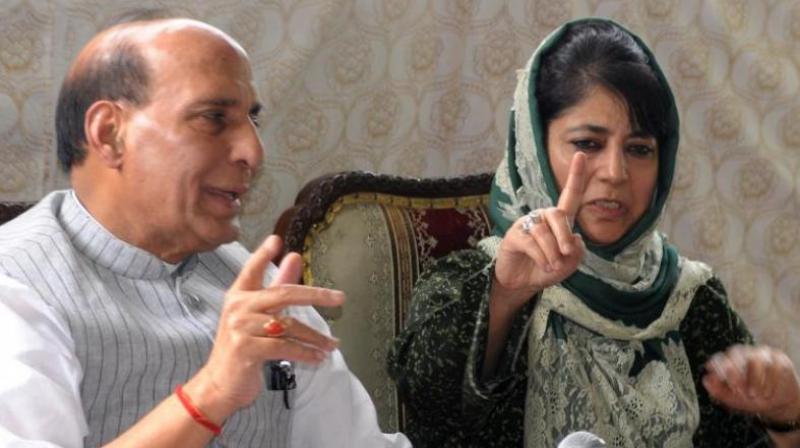 The BJP pulled out of the alliance with Mehbooba Mufti-led coalition government in Jammu and Kashmir on Tuesday. (Photo: File)

New Delhi: After the BJP pulled out of the ruling alliance with the PDP in Jammu and Kashmir on Tuesday, the Congress has ruled out the possibility of extending support to the PDP.

Omar Abdullah’s National Conference, too, does not plan on extending support to the PDP. This means that the state of Jammu and Kashmir is now headed for Governor’s rule.

A hostile ground situation is another cause of worry if elections are to be held anytime soon.

Given that bypolls to the Anant Nag Lok Sabha seat could not be held in the last one year due to a hostile ground situation, it is unlikely fresh elections will be held soon for the state assembly.

The Army and other security forces are planning to launch a tough campaign against terrorists. An ‘Operation All Out II’  is in the works against the terrorists in the state.

In the first phase of the operation earlier, more than three hundred militants, including several top commanders, were killed in 2017 and during the first four and half months of 2018.

Earlier on Tuesday, the BJP pulled out of the alliance with Mehbooba Mufti-led coalition government in Jammu and Kashmir.

Sources in Mufti’s Peoples’ Democratic Party (PDP) said that after deciding not to extend the conditional ceasefire announced by the Centre for the Islamic fasting month of Ramzan, the Modi government decided to launch a tough military campaign against separatist militants in the restive state and give a ‘free hand’ to security forces to deal with the situation. The PDP did not agree to it which set off differences of point of no return.

The Chief Minister and the PDP had also pleaded for extending the Ramzan truce beyond Eid-ul-Fitr to pave the way for holding talks with the separatists which was ignored by the Centre, the sources said.