The much-awaited decision was taken at a key strategy meeting at Congress Parliamentary Party leader Sonia Gandhi’s residence in the morning. 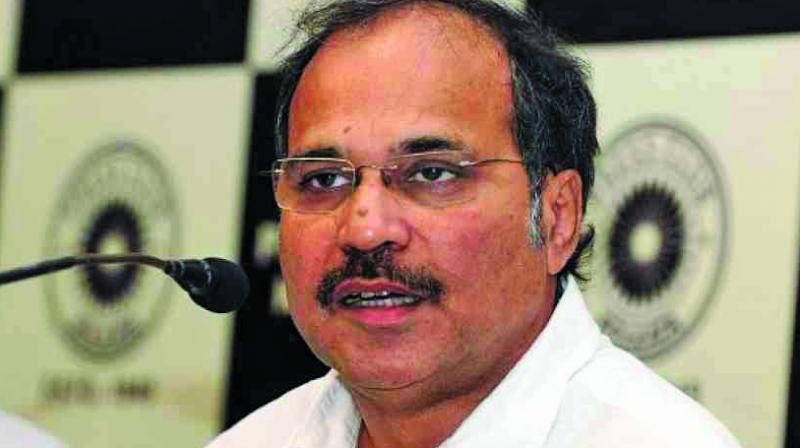 New Delhi: Congress MP from West Bengal Adhir Ranjan Chowdhury was on Tuesday selected as leader of the party in the Lok Sabha. The much-awaited decision was taken at a key strategy meeting at Congress Parliamentary Party leader Sonia Gandhi’s residence in the morning.

Besides being a five-time MP, Mr Chowdhary is known as a fighter, a fact acknowledged by even Prime Minister Narendra Modi during Sunday’s all-party meeting.

Though Mr Chowdhary, briefing the media after the meeting, did not officially confirm his selection, sources said his name was finalised after Congress president Rahul Gandhi refused the position. Mr Chowdhury replaces veteran Congress leader Mallikarjun Kharge, who this time lost the election from Gulbarga.

Others in contention along with Mr Chowdhury were Kerala MPs K. Suresh, Shashi Tharoor and former information and broadcasting minister Manish Tewari. Sources said Mr Suresh’s name had been finalised as chief whip, a position that was held by Jyotiraditya Scindia, who also lost the election this time.

This is the second time that the Congress Party will be denied the post of Leader of the Opposition as, with 52 seats, it had failed to get the requisite 10 per cent of the strength of the House.

However, as leader of the Congress Party in the Lok Sabha, the largest bloc in the Opposition, Mr Chowdhury will be a special invitee to a number of committees that select candidates for key posts such as the CBI director. It may be recalled though that Mr Kharge had refused to attend these meetings as he had not been officially given the Leader of the Opposition status.

Mr Chowdhury, a five-time MP from Behrampur, is known as a grassroots leader in his constituency. At the all-party meeting on Sunday, Mr Modi had praised him, calling him a “yoddha (warrior)”.

The Congress has been in the throes of an internecine blame game following the party’s second successive rout in the Lok Sabha polls. Party president Mr Gandhi, taking responsibility for the defeat, had verbally resigned and asked the party to chose another leader. However, nothing has moved on this front and, instead, the senior leadership met a couple of times to deal with routine matters.

At the Congress Working Committee meeting on May 25, Mr Gandhi is learnt to have pinpointed certain senior leaders as only working for their personal gain.

In fact, Tuesday’s meeting of senior leaders was the first official meeting attended by Mr Gandhi since the May 25 impasse, after which he refused to meet any senior leaders.

The Congress top brass also deliberated on the issue of the new Lok Sabha Speaker and is understood to have decided the candidature of the NDA’s Om Birla. Speaking to reporters after the meeting, Mr Chowdhury said: “No problem, we won’t oppose anyone’s name.”