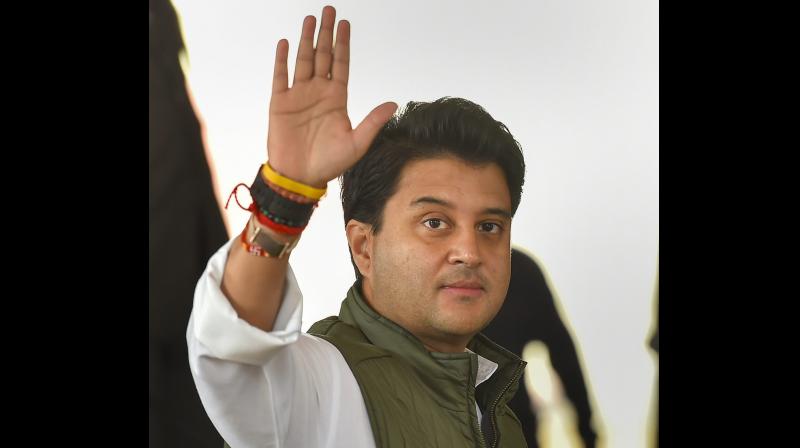 Bhopal: Stakes are high for two veteran leaders and Rajya Sabha candidates, Digvijay Singh of Congress and Jyotiraditya Scindia of BJP, in the June 19 biennial polls in Madhya Pradesh. Three Rajya Sabha seats are going to polls in MP.

The biennial elections is all set to provide the two leaders, considered arch rivals in MP politics, fresh opportunity to revive their sagging political career in the wake of their stunning losses in the last Lok Sabha elections from their respective constituencies.

Singh and Scindia have been chosen the first preference candidates by their respective parties in the polls, so they may sail through the biennial polls smoothly.

Incidentally, Congress has decided to play safe in Singh’s case by assigning 54 party MLAs to vote for him even though a candidate needed 52 votes to go to Rajya Sabha from Madhya Pradesh in the biennial elections.

Besides Singh, Congress has fielded another candidate, Phool Singh Bairar, as its second preference candidate. Congress has strength of 92 in the truncated Assembly of 206 following the resignation of 22 MLAs and death of two legislators.

The resignation of 22 former Congress MLAs, loyalists of Scindia, led to fall of Kamal Nath government. They later followed Scindia to quit Congress and join the BJP.

The ruling BJP, which has 107 MLAs, has fielded two candidates, Scindia as party’s first preference candidate, and Sumer Singh as its second preference nominee.

The party is in a position to send both of its candidates to the Upper house comfortably considering its strength in the house.

However, the party has decided not to leave anything to chance, wooing four Independents, two Bahujan Samaj Party (BSP) and the lone Samajwadi Party (SP) legislators. All of them were invited to the dinner hosted by the chief minister Shivraj Singh Chouhan on Wednesday night.

The party, too, appeared apprehensive of cross-voting in its legislature party as its move to woo the independent MLAs and BSP and SP legislators has indicated.