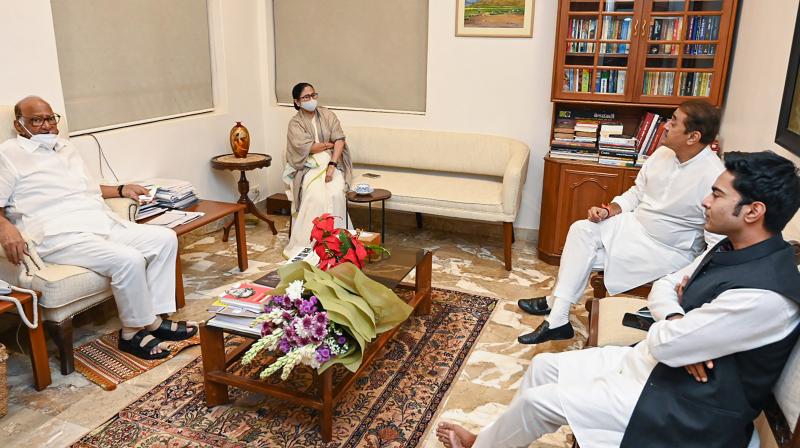 Kolkata: Trinamul Congress chairperson and West Bengal Chief Minister Mamata Banerjee will not attend the Opposition parties' meet called by NCP chief Sharad Pawar on June 21 to decide the candidature for the Presidential election which will take place on July 24, sources said on Sunday. She has informed him about her inability to attend after getting his invitation in email on Saturday evening.

She is likely to send her nephew, party general secretary and MP Abhishek Banerjee, to represent her and get a feel of the pulse at the meeting, according to sources.

While a section of TMC leaders claimed that Mamata Banerjee was upset with the agenda mentioned in Pawar's letter, another group pointed out her preoccupation on that date as the reason for her skipping the meet.

TMC insiders alleged that there was no mention in Pawar’s letter of a future deliberation of the decision to field a candidate on the basis of a consensus among Opposition parties, which was taken at the previous meeting initiated by Mamata Banerjee in New Delhi on June 15.

This hurt her and prompted her to decide to skip the meet despite sharing cordial relations with the NCP chief, revealed a party leader on Sunday.

Last week, 17 out of 22 Opposition leaders from the Congress, DMK, NCP and the Samajwadi Party among others had attended the June 15 to decide a Presidential candidate against the BJP-led NDA government at the Centre. Pawar had met Mamata Banerjee on that day.

Pawar declined to be the joint Opposition candidate at the June 15 meeting while J&K National Conference leader Dr Farooq Abdullah, one of the names mentioned at the meeting, also said he was unavailable.