After two adjournments, when the House re-assembled, Agrawal said he did not intend to hurt sentiments of anyone. 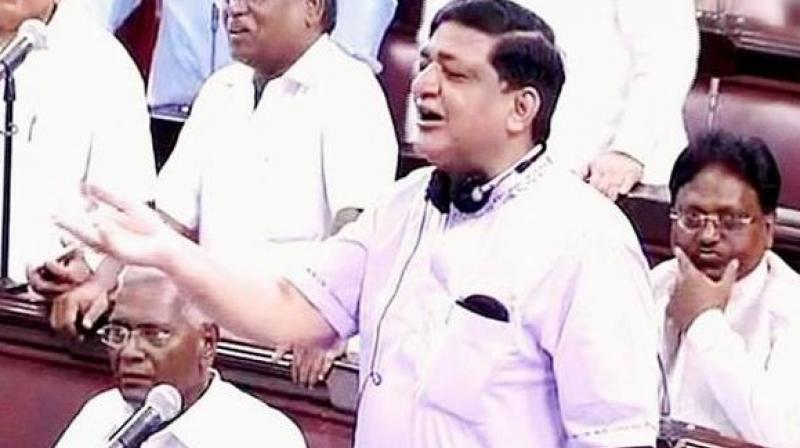 SP leader Naresh Agrawal made the comment while participating in a short duration debate on 'rising incidents of lynching and atrocities on minorities and dalits across the country'. (Photo: PTI)

New Delhi: A controversial remark by a Samajwadi Party (SP) leader against Hindu gods on Wednesday triggered uproar in the Rajya Sabha, forcing its two adjournments before he expressed regret.

SP leader Naresh Agrawal made the comment while participating in a short duration debate on 'rising incidents of lynching and atrocities on minorities and dalits across the
country'.

The comment triggered an uproar as the ruling party members said he had hurt religious feelings of the majority of people and this also was "lynching". They insisted that he should apologise.

"He has linked each of the Hindu Gods with a brand of alcohol. If he would have made this statement outside Parliament, he would've been booked. Do you have the audacity of repeating this in relation to any other religious denomination? Would you do this?" said Union Finance Minister Arun Jaitley, demanding an apology.

After two adjournments, when the House re-assembled, Agrawal said he did not intend to hurt sentiments of anyone.

"If someone has been been hurt, I express my regret," the SP member said.

Later, Deputy Chairman P J Kurien ruled that part of Agrawal's remarks had been expunged and asked the media to guard against using these.

Earlier, while taking strong objection to the usage of words by Agrawal, Leader of the House and Finance Minister Arun Jaitley said: "He (Agrawal) has linked up each of the
Hindu Gods with brands of alcohol. If he had said this outside, he would have been liable to prosecution.You have not realised the gravity of what you have said. Do you have the audacity to say about other gods?"

Seeking apology, Parliamentary Affairs Minister Ananth Kumar said, "He cannot hurt the sentiments of the majority people who are Hindus. He cannot hold the House to ransom."

BJP member Bhupender Yadav said, "In this House, no member should hurt the feelings of others. This is also lynching."

The ruling party members were on their feet demanding apology and shouted slogans 'Bhagwan ka apman nahi chalega (disrespect to Gods will not be tolerated).

Kurien, who missed the remark as he was busy speaking to a member, said he will check the records and expunge the comment.

"I have called for records. I will check and expunge the comment if any derogatory remarks are made," he said.

Minister of State for Parliamentary Affairs Mukhtar Abbas Naqvi requested the Chair to adjourn the House till the records were checked. The House was then adjourned for 10
minutes.

As soon as the House re-assembled at 1521 hours, both the Treasury and the Opposition members were on their feet and trading barbs. Trying to bring the House to order, the Deputy Chairman said, "I have gone through the records. It is per se derogatory and hurting the sentiments of majority community...I have expunged these remarks...He should not have made the remarks..."

However, the uproar continued with Agrawal reiterating that cowsheds are run by Agrawal community and "if my statement has hurt members, I withdraw it."

But the BJP members continued to demand apology from him. The Deputy Chairman intervened, saying he had already "disapproved" of and "condemned" the remark and urged the members to not to fight on the issue.

The remarks were "hurting" members sentiments and "it is not on record", Kurien said.

He urged Agrawal to express regret and react to the situation to bring the House to order.

Agrawal said, "Lynching is a major issue..." To this, Kurien insisted that he should express regret.

CPI-M leader Sitaram Yechury tried to intervene, saying the matter should be allowed to rest.

"Naresh Agrawal has said something offensive. you (Chair) have gone on record condemning that. It is my appeal that let the House function," Yechury said.

However, the ruling party members were adamant on Agrawal tendering apology. Ananth Kumar said, "He has not insulted a single person. He has insulted a community."

Ram Gopal Yadav, another party leader of the SP, said Agrawal will not tender apology even if the entire session has to function like this. Naresh Gujral (SAD) suggested sending the issue to the Privileges Committee of the Rajya Sabha for a decision on it.

He said last year, during the JNU agitation, a Cabient Minister had made certain "derogatory" remarks against Goddess Durga and refused to apologise.

He said the issue pertained to faith of all and urged for a solution to it. However, the ruling party members continued to raise slogans and the Chair adjourned the House till 4 pm.

He said the government wants the House to function and the SP member should not make it a prestige issue.

Yadav said if the Cabinet minister has apologised, then Agrawal will also apologise. "There cannot be double standards," he added.

Agrawal then expressed regret and said in his entire political career, he has never hurt sentiments of any caste and religion.

The SP leader said he has never made any personal allegations as well. Earlier, IT and Law Minister Ravi Shanker Prasad said that Agrawal's commenets were not correct and the SP leader should regret.

After Kurien's ruling about expunging the remarks, Congress leader Anand Sharma said it should be ensured that these comments do not surface on the social media and passions are not inflamed.

Prasad said he would convey this to the authorities concerned. At the same time, he said the character of social media has changed and "we will have to collectively ensure that this does not spread" on the social media.