He also warned that if somebody else is made president and some do not accept him, then there are chances of disintegration of the party. 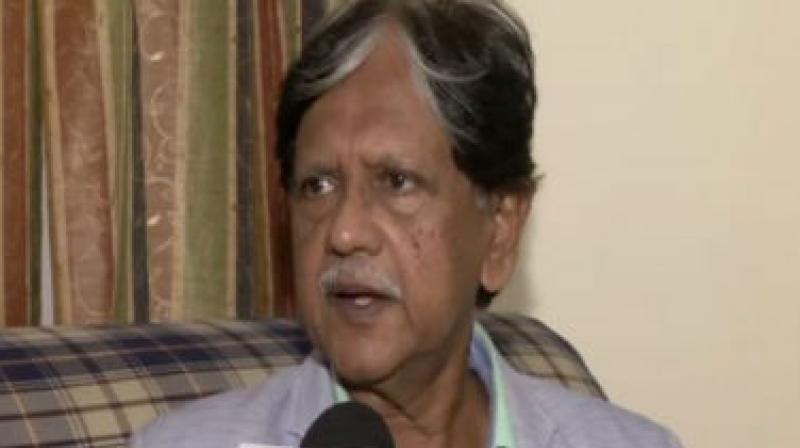 ‘So, a powerful leader, who is acceptable to all, is necessary. If we are looking for such a person, then there is no one other than the members of the Gandhi family. Such is the situation of Congress party that there will be a question mark on its existence without Gandhi family,’ added Shastri. (Photo: ANI)

New Delhi: Son of former prime minister Lal Bahadur Shastri, Anil Shastri on Thursday expressed worry over the current crisis enveloping the Congress party and opined that the grand old party needs a 'Gandhi' at the helm, otherwise it might meet the same fate as regional parties like NCP, TMC and get disintegrated.

With Rahul Gandhi not willing to continue as Congress president, the party is facing a leadership crisis at present. The Congress leader said that Priyanka Gandhi should be made the party president as no one other than her is "100 percent acceptable". He also warned that if somebody else is made the supremo and a section of the outfit does not accept him, then there are chances of the disintegration of the party.

"See, there is Mamata Congress (TMC), Sharad Pawar Congress (NCP), Jaganmohan Congress (YSRC). So if there is no strong leadership, I won't be surprised if regional Congress emerges in states...be it in Haryana, Madhya Pradesh, or Maharashtra. There is no one other than Priyanka Gandhi who will be more acceptable. I also believe that she has the ability to take the party leaders and workers along. She has a certain following among masses too", he told ANI.

"So, a powerful leader, who is acceptable to all, is necessary. If we are looking for such a person, then there is no one other than the members of the Gandhi family. Such is the situation of Congress party that there will be a question mark on its existence without Gandhi family", added Shastri.

Around 50 days after Rahul stepped down as Congress president, taking moral responsibility for the humiliating defeat in the Lok Sabha elections, the grand old party is yet to finalise its new chief. Asserting that party needs strong leadership, he said: "Congress respects Rahul's sentiments. I respect him too. Congress party needs leadership. The situation through which Congress is passing right now, I believe that the party should get a president as soon as possible".

Gandhi, now an MP from Wayanad in Kerala, became the Congress president in 2017. He offered to step down from his post at the Congress Working Committee (CWC) meeting on 25 May, taking moral responsibility for the party's drubbing in the 17th Lok Sabha elections.

Commenting on the recent crisis that has hit the party in several states, he said: "Since there is no leadership, that is why you are seeing this disintegration. I think there will be further disintegration in the coming times. So, the Congress should elect a new president as soon as possible".

At present Congress in Goa has completely lost foot, after 10 of its MLAs switched side with the BJP. This has reduced its strength to five in the Assembly. Similarly, in Karnataka the situation is equally embarrassing for the party, as its coalition government with JD(S) is facing tough time. Governor Vajubhai Vala on Thursday wrote a letter to Chief Minister HD Kumaraswamy asking him to prove majority on the floor of the House by Friday afternoon.

The Congress slumped into a minority following the resignation of the dissident MLAs. Sixteen MLAs from the ruling coalition including thirteen Congress and three JD(S) MLAs have resigned. In total, the survival chances of Congress in its ruled state are becoming difficult day by day since the announcement of 2019 general elections results. The Congress won 52 seats in the recent general elections, which is just eight more than its 2014 Lok Sabha tally of 44.