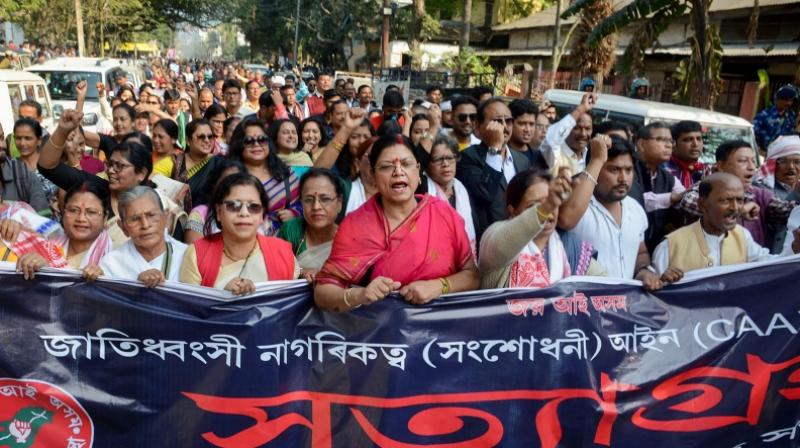 The two powerful students organisations in a joint press conference announced the formation of an 18-member committee which will suggest measures and course of action to defend the rights of indigenous people of the state. PTI file photo

Guwahati: In what is said to be a step towards formation of a new political party in the state, the powerful All Assam Students Union (Aasu) and Asom Jatiyatabadi Yuva Chatra Parishad (AJYCP)  here on Wednesday formed a committee of prominent citizens to suggest them future course of actions to handle the academic, social, economic and political discourse to protect the future of the indigenous people of the state.

The two powerful students organisations in a joint press conference announced the formation of an 18-member committee which will suggest measures and course of action to defend the rights of indigenous people of the state.

Aasu General Secretary Lurin Jyoti Gogoi, who is in the forefront of the student leaders advocating formation of a new political party ahead 2021 assembly polls, said that the people of the state wants permanent solution to the burning issues of the state after the regional party which was formed in 1985 destroyed all the dignity of the state and the indigenous people.

He reiterated that the people want an uncompromising power in the state which would solve the issues of the state and therefore the advisory committee has been formed jointly by Aasu and AJYCP for the safety and security of the people of the state.

The committee will have eminent litterateur and former Rajya Sabha member Nagen Saikia, and Padma Shree awardee and writer-journalist Arup Kumar Dutta as the members.

The other prominent members are former Meghalaya governor Ranjit Shekhar Mooshahary, who was also the director general of NSG, BSF and DGP of Kerala, an National Award- winning filmmaker Jahnu Barua, also a Padma Bhushan awardee, among others, the students leader said.

Aasu Adviser Samujjal Bhattacharya who was also present said that the political injustice and betrayal by the government has put the people in quandary.

On being asked if the students body was entering politics Bhattacharya said, “The non-political nature of AASU and AJYCP will remain. Now, what we can do being in Aasu, that will be advised by this committee.”

The idea of launching a new regional political party to counter the surge of saffron party in the state had come into existence during the anti-CAA movements that had rocked the state.

Apart from Aasu and AJYCP leaders along with those from Krishak Mukti Sangram Samiti (KMSS) some prominent citizens, singers and artists had also stressed the need of a new political platform to take up the cause of indigenous people, allegedly compromised during the BJP regime.