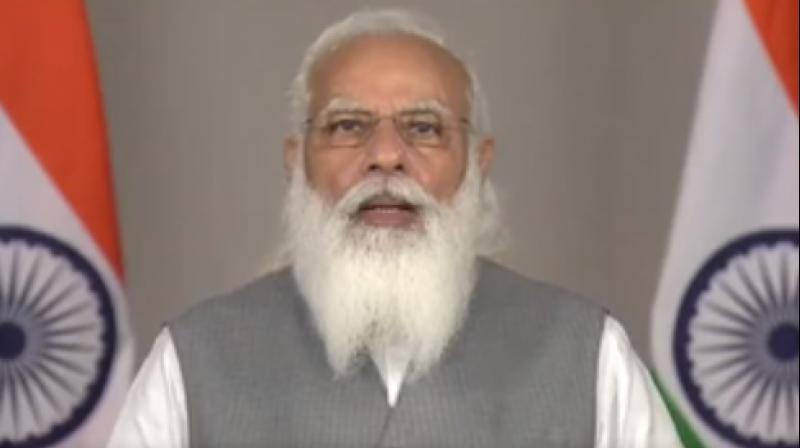 New Delhi: The government is looking at the evacuation of Indians stranded in Afghanistan as a top priority and the situation is likely to get clearer in a couple of days -- on how many people need to be evacuated, sources said Wednesday, as Prime Minister Narendra Modi chaired another meeting of the Cabinet Committee on Security (CCS) to discuss the crisis in the strife-torn nation and its implications for India.

Sources said the commercial airspace over Kabul was still closed due to which Air India could not operate its flights to the Afghan capital on Wednesday. The other option -- of more sorties by Indian Air Force C-17 Globemaster aircraft -- also remains, with these planes having evacuated Indian diplomats and security personnel from Kabul on Tuesday.

India, which had strongly backed the erstwhile Afghan government of President Ashraf Ghani, is now out in the cold after having evacuated all its diplomats from the strife-torn nation. India appears to be in a “wait and watch” mode and it appears too early to say whether there could be any efforts to engage with the new rulers in Kabul, who are expected to be heavily pro-Pakistan. India had given humanitarian and development assistance of over $3 billion to Afghanistan in the past two decades, under which more than 500 infrastructure/development projects were undertaken. New Delhi is expected to begin an extensive process of consultations and be in touch especially with Western nations and time-tested friend Russia on what to do next as far as any international engagement with the Taliban is concerned.

Some of the state governments have, meanwhile, declared that they are taking up with the Centre the evacuation of Indians, including people belonging to their respective states. The external affairs ministry had earlier set up a Special Afghanistan Cell and had asked Indian nationals still stranded there or their employers “to urgently share the relevant details”. Some of these include Indian citizens who were working for third countries and also reportedly some Indian academics teaching in Kabul. News agency reports said four Indian teachers at Kabul’s Bakhtar University have appealed for immediate evacuation so they can return to their families back home.

The Karnataka government on Wednesday appointed a senior IPS officer as nodal officer to coordinate with the Centre to bring back Kannadigas from Afghanistan. “As there is a conflict situation in Afghanistan, to bring back Indians stranded there, the Central government has already started a helpline. To coordinate with the Central government and bring back Kannadigas safely from there, Umesh Kumar, IPS, additional DGP, CID, Bengaluru, has been appointed as nodal officer,” said an official notification from Bengaluru.

West Bengal chief minister Mamata Banerjee said Wednesday that her government was coordinating with the Centre for the safe return of over 200 people from the state who are still stranded in Afghanistan. She said the stranded West Bengal residents are from Kalimpong and Terai who were working in Afghanistan. “The chief secretary will write to the MEA to bring them back,” she told reporters.

The four Indian teachers at Bakhtar University in Kabul are a worried lot. “We have reached out to every possible forum in India, and we are hoping that the government will do something to ensure our immediate evacuation. I have not stepped out of the campus for two days and every time there is a commotion outside, my heart skips a beat,” Mohd Aasif Shah told PTI over the phone. Mr Shah, who is a resident of Kashmir and has been teaching economics at the Kabul university for four years, said that like his colleagues, he fears the current atmosphere following the unexpected turn of events. “I had plans to go back on Monday. I even had my ticket booked but the situation was rapidly changing. It took me hours to get to the airport and the sight at the airport was like the whole of Kabul had gathered there. The flight was cancelled, and I had no choice, but to return to the university hostel,” he said. Mr Shah had gone back to Afghanistan two months ago after the government decided to conduct offline examinations. “My family used to be here with me in Kabul. We all went back to India after the Covid-19 outbreak, and classes were online. However, the government decided to hold exams offline. So I came back for only two months, and I was due to return after the exams were over,” he said.

Syed Abid Hussain from Bihar, who teaches marketing at the university, said so far everybody was safe, but considering the situation “we do not want to live in this uncertainty”. “We have tried to get in touch with the embassy as well as the ministry of external affairs. We have not heard from them yet, but I am confident that the government must be making efforts for our safe and quick evacuation from Kabul,” he said. Adil Rasool from Kashmir, whose wife is there with him at the university, said: “We are just praying that the situation does not get any worse than this and we are able to go home safely.”