Mamata Banerjee meets PM, invites him to Bengal after Pujas

The state Assembly has already passed a resolution to rename the state as “Bangla”. 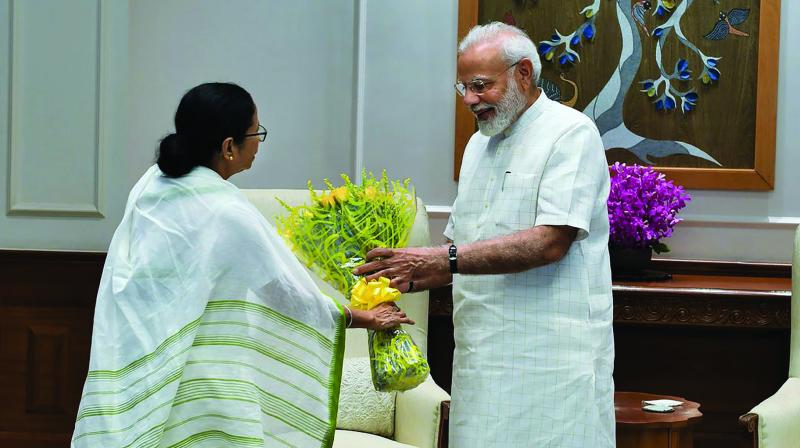 New Delhi: West Bengal chief minister Mamata Banerjee on Wednesday met Prime Minister Narendra Modi and discussed issues relating to her state, including the politically sensitive issue of a change in the name of West Bengal to “Bangla”.

The state Assembly has already passed a resolution to rename the state as “Bangla”.

However, Ms Banerjee, who is on a three-day visit to New Delhi, did not discuss the controversial issue of the National Register of Citizens with Mr Modi.

Briefing reporters after the meeting, the Trinamul Congress chief said she had invited the PM to West Bengal after Durga Puja to inaugurate a coal block in Birbhum called Deocha Pachami. “It is a project with `1,200-crore investment and I have requested the PM to inaugurate it after Navratris,” she said.

The West Bengal CM also briefed Mr Modi about economic development in the state over the past eight years and gave him a paper listing details.

The TMC chief, who is seen as one of the nation’s foremost critics of the Modi government, however, did not touch controversial issues the NRC in Assam, in which lakhs of Bengalis have been left out.

Responding to a question on the National Register of Citizens, she said it was a part of the Assam Accord, hence there is no provision for its implementation in West Bengal. “Neither has any proposal come, nor will it be done,” she said.

Sources said Ms Banerjee has also sought time to meet home minister Amit Shah. Mr Shah, as BJP chief, is credited with having severely dented the Trinamul Congress in West Bengal. The BJP had won 18 seats in the recent Lok Sabha polls, out of the state’s 42 seats, its best tally ever there.

In the Assembly polls due in 2021, the BJP is likely to be the main challenger to the TMC, which has won the last two Assembly elections convincingly.

The meeting at the Prime Minister’s residence lasted for about half an hour. Ms Banerjee said the meeting was not political but focused on development issues of the state. She was meeting the PM for the first time after he won a second term. She did not turn up for Mr Modi’s swearing-in ceremony and had skipped a meeting of the Niti Aayog.

She also said that they spoke a “little” on the political situation in general. “However, this was a government to government meeting, nothing political. When I come to Delhi, I always meet the home minister. If he gives me time, I will meet him tomorrow,” she added.