The minister is reportedly still held up on the campus with the protesting students blocking the way to his car. 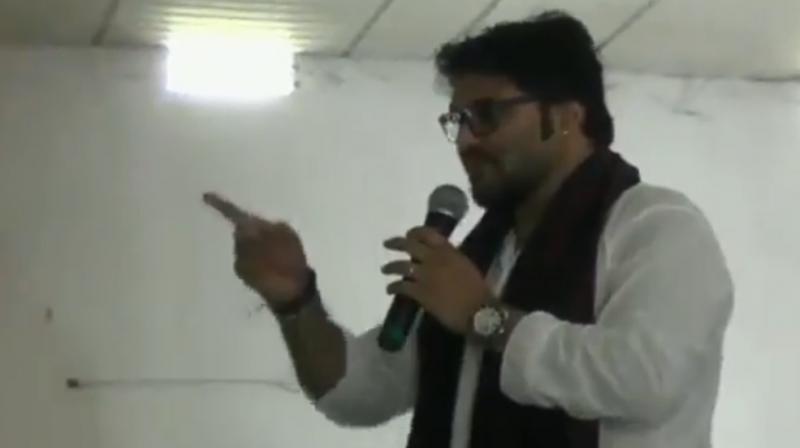 ‘I did not come here to do politics. But I am saddened by the behaviour of some of the students of the university, the way they have heckled me. They pulled me by my hair and pushed me,’ Babul Supriyo said. (Photo: ANI)

Kolkata: BJP’s Union Minister Babul Supriyo was today shown black flags and was allegedly heckled by some students at Kolkata's Jadavpur University. Supriyo was on a visit to the varsity to address a seminar organised by the Akhil Bharatiya Vidyarthi Parishad, or ABVP, the students' body linked to the BJP.

He was initially prevented from entering the campus for over an hour. The students who were a part of the Left leaning organisations – the Arts Faculty Students’ Union (AFSU) and the Students Federation of India (SFI) raised slogans "Babul Supriyo Go Back" against the BJP leader.

The Asansol MP again faced protests around 5 pm in the evening when he was trying to leave the university campus. He claimed that he was heckled by the students who also allegedly "pulled him by his hair".

"I did not come here to do politics. But I am saddened by the behaviour of some of the students of the university, the way they have heckled me. They pulled me by my hair and pushed me," Supriyo was quoted by news agency PTI.

Supriyo also claimed that the protesting students tried to "provoke him by openly calling themselves naxals".

The minister is reportedly still held up on the campus with the protesting students blocking the way to his car.

According to PTI, Jadavpur University Vice Chancellor Suranjan Das tried to talk with agitating students, who refused to move from the main entrance of the university.

"Whatever they may try to do, they cannot provoke me. The role of the opposition in keeping democracy alive is as important as that of the ruling party, and it is also necessary to listen to the differences patiently," he said on Twitter as he condemned the "stampede-like situation".

West Bengal Governor Jagdeep Dhankhar has taken a "very serious view" of the incident, according to his press secretary, adding he has spoken to the Chief Secretary of the state about the matter.

Press Secy to West Bengal Governor: Governor spoke to the VC of Jadavpur University & indicated to him that it was improper for him not to have taken prompt steps in the matter, that can lead to unwholesome results.This is a very serious reflection on the law & order of the state https://t.co/yIH9DRGPAj

"The incident of gherao of Union Minister Babul Supriyo and others by a section of the students in Jadavpur University is a very serious matter. It shows an adverse reflection on the law and force agency in the state," Governor Dhankhar told PTI.

Chief secretary Malay De has assured the governor, who is the chancellor of the university, that the city police commissioner is being directed to look into it immediately.