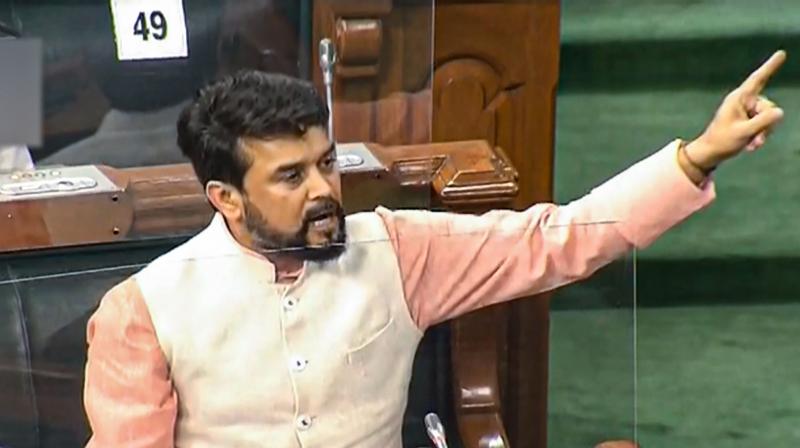 Minister of State for Finance Anurag Thakur speaks in Lok Sabha during the ongoing Monsoon Session of Parliament, amid the coronavirus pandemic, in New Delhi, Friday, Sept. 18, 2020. (LSTV/PTI)

New Delhi: There was high drama in the Lok Sabha as minister of state for finance Anurag Thakur made disparaging remarks about the Nehru-Gandhi family, which led to several adjournments, as Congress Lok Sabha leader Adhir Ranjan Choudhury called him “a chhokra from Himachal Pradesh”.

Later, the proceedings resumed only at 6 pm after four adjournments, when Thakur “apologised” to the House, saying he was “pained” if his words had hurt anyone, on the insistence of Speaker Om Birla.

Earlier, the trouble began when during the introduction of the Taxation and Other Laws (Relaxation and Amendment of Certain Provision) Bill by finance minister Nirmala Sitharaman, Opposition members criticised the PM-Cares fund’s validity.

Thakur counter-attacked immediately and accused the Gandhi family of “cheating” people by pooling public money through creation of various funds under different names.

While Opposition leaders — Shashi Tharoor, Manish Tewari and Adhir Ranjan Chowdhury — were critical of the PM-Cares fund during the discussion on the legislation, Thakur said: “From the High Court to the Supreme Court, all courts have validated the PM-Cares fund. Even children have contributed to it from their piggy banks. Nehru had set up a fund that has not been registered to date. You (Congress) only made a trust for the benefit of the Gandhi family. You made Sonia Gandhi its chairman. It should be probed.”

“Nehruji ordered the creation of Prime Minister’s National Relief Fund in 1948 like a royal order, but its registration has not been done even till today. How did it get FCRA clearance?” Mr Thakur sought to know.

This irked the Opposition and Congress leader Adhir Ranjan Chowdhury lashed out at Mr Thakur, calling him a chhokra, demanding an apology for maligning the Nehru-Gandhi family.