Tamil Nadu polls 2021: Is Alagiri going to form his own party, align with BJP? 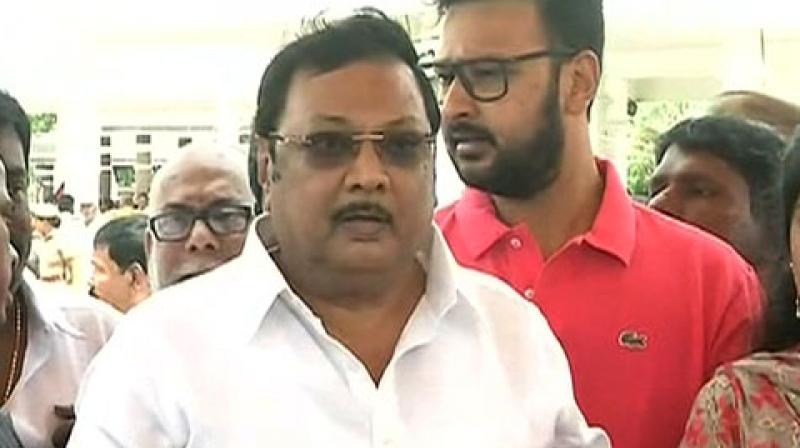 Alagiri, a former union minister, is the elder brother of MK Stalin, who is the current president of DMK. (Photo: ANI)

Chennai: Is MK Alagiri, the elder brother of DMK President MK Stalin, set to rise in the s tate’s political horizon like the mythical Phoenix by latching on to the BJP bandwagon? This is the question that many in Madurai, where the former Union Minister lives, are asking after he came out of his hibernation by calling up some of his erstwhile supporters and followers to greet them for Deepavali.

Alagiri, who had been generally maintaining a low profile after his expulsion from the DMK in 2014, reportedly broke his self-imposed cocoon and telephoned his men. He is said to have alerted them about some potential political activity from December, triggering speculation on his plans to launch a party of his own.

Though rumours of Alagiri starting his own outfit have come out in the past, this time many feel that it could be for real, given the fact that the elder son of late DMK patriarch M Karunanidhi could be meeting Union Home Minister and top leader of the BJP, Amit Shah, when he visits Chennai on November 21.

At a time when the BJP is said to be calling up every political leader they could get in touch with, irrespective of ideological leanings and religious affiliations, to request them to join the party, there seems to have some substance in the latest rumour of Alagiri possibly tying up with BJP.

Though Alagiri was functioning as a southern satrap of the DMK in his heydays – he was the party’s South Zone secretary last – and was credited with engineering the infamous ‘Thirumangalam formula’ that came to national limelight as the pioneering cash-for-vote exercise in the 2009 by-elections for the Thirumangalam Assembly Constituency, he had been totally out of action in the past six years.

However, it is believed that the BJP, which has seemingly set itself a goal of defeating the DMK in the 2021 Assembly elections, might use Alagiri in its mission. So, he may start a party and then align with the BJP for the elections, it is believed. It is a different matter if Alagiri commands votes on his own or can wean voters away from the DMK, the BJP perhaps considers him to be a force to reckon with in southern Tamil Nadu.

Even otherwise, the BJP has high hopes on Shah’s one-day visit to Chennai. State BJP President L Murugan openly said that his coming would give the jitters to rival political parties. Whatever he meant by that, it is clear that Shah has a lot of programmes and meetings lined up for him. One meeting could be with actor Rajinikanth, sources said.