Slamming the Opposition parties, the PM said the successive governments failed to develop the region even after 70 years of independence. 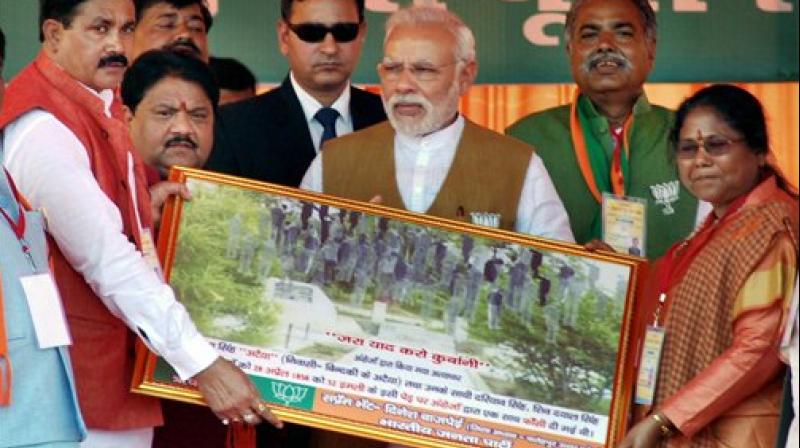 At an election rally in Orai region of Jalaun in Bundelkhand region, the Prime Minister said those who deposit wealth for themselves can never solve the problems of people.

He also attacked the SP and Congress for criticising the demonestisation decision.

"Where has Bahujan Samaj Party (BSP) reached today...when I announced note ban on November 8 last year, arch-rivals SP and BSP, who never see eye-to-eye, came together...I was amazed when I launched war against corruption and asked for the details of blackmoney. They came together and all including the Congress started speaking the same language," Modi said.

The main concern of the parties in Uttar Pradesh was not note ban but that they did not get enough time to stash away the ill-gotten money.

"Behenji (Mayawati) alleges that government was ill-prepared... was it the government or it was you who was not prepared...she said one week should have been given (before implementing note ban)...Mulayam also said the same," he said.

"Money started being deposited in banks all of a sudden (after note ban) and (Mayawati) started shouting as why is it only at election time that the account of her brother has been made public...why is it being discussed that Rs 100 crore have been deposited," he said.

"Arrey Behenji discussion not because elections are being held but because you have deposited Rs 100 crore after note ban...BSP is no longer Bahujan Samaj  Party...bahujan toh Mayawati me simat gaya hai...it is Behenji Sampatti Party now. Those who deposit wealth for themselves, can they solve your problem?" he asked.

Modi said BJP's fight is against scam meaning 'ghotale'. "I have said SCAM stood for SP, Congress, Akhilesh and Mayawati...there is a leader who is seeing honesty and service in scam and had said for us scam is 'seva' do you need such service? You have an opportunity in this elections to throw out SCAM from Bundelkhand," he said, without naming Rahul Gandhi.

Mayawati, meanwhile, responded to the comments saying that Modi would get tit-for-tat reply in UP polls.  “Modi is defining BSP wrongfully. I dedicated my life for the poor, deprived and Dalits. They consider me as a big "sampatti' (asset) for them,” she said.