Congress' KC Mittal said that the Bharatiya Janata Party symbol should be withdrawn and should be derecognized. 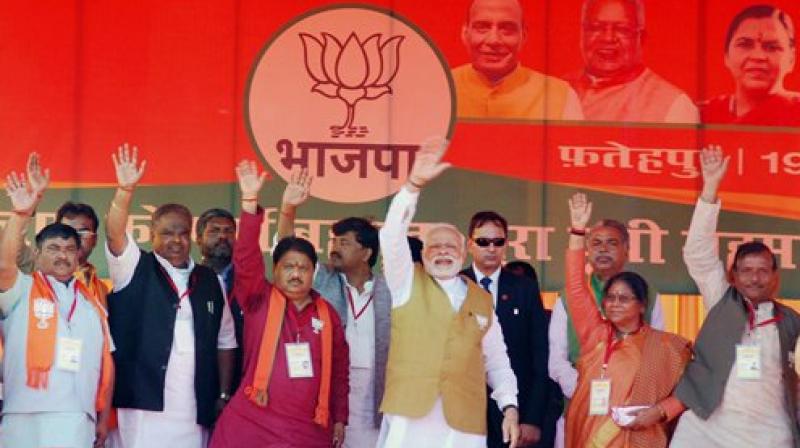 New Delhi: Branding Prime Minister Narendra Modi's "Diwali, Ramzan bhed-bhav" remark as deplorable, Secretary of the Legal and Human Rights Department of the Congress party KC Mittal on Monday appealed to the Election Commission to exercise its constitutional powers and take stern action to ensure that free and fair elections are held.

Mittal said that the Bharatiya Janata Party symbol should be withdrawn and should be derecognized.

"We will approach the Election Commission that stern action should be taken against the Prime Minister and the BJP. Earlier also we have made number of complains and having requesting of de-recognisation of their symbol. We hope and expect that the EC will ultimately exercise their constitutional powers and ensure that free and fair elections are held. Their symbol should be withdrawal and should be derecognized," he added.

He further said that the speech was not only deplorable but it totally violates in the model code of conduct.

"Prime Minister talks of shamshaan and kabristan to evoke the religious sentiments of the people. He talks of Dalits, OBC trying to show discrimination; he talks of Diwali and Eid. All that is in what he said is in particular in reference to evoke the feelings of the people and it is clear violation of the court," he added.

The Congress is set to file a complaint against Prime Minister Narendra Modi over his controversial remarks made during his rally in Fatehpur district in Uttar Pradesh on Sunday.

Prime Minister Modi on Sunday said that no government must discriminate the public on the lines of religion and caste.

"Ramzan me bijli athi hai tho Diwali me bhi ani chahiye; Bhedbhav nhi hona chahiye (If there is electricity during Ramadan then it must be available during Diwali too; there shouldn't be any discrimination)," he said.

The other statement which seems to have invited the wrath of the Congress was when he said, "Gaon me kabristan banta hai to shamshaan bhi banna chahiye" (If land is given for cemetery in a village, it should be given for cremation ground also).

Asserting that the public should not be divided into lines of caste and religion, he further stated that "Sabka sath, sabka vikas" is his government's mantra.

Last week, the Congress has asked the Election Commission to take action against Prime Minister Modi and the Bharatiya Janata Party (BJP) for hosting a public rally in Uttarakhand without permission.

Uttarakhand Congress President Kishore Upadhyay had dispatched a letter to the Election Commission, terming the Prime Minister's 10 February public rally as unauthorised and an open case of model code of conduct violation.

In January, the BJP had demanded that the Election Commission freeze the election symbol of Congress alleging that its Vice-President Rahul Gandhi violated the model code of conduct by linking his party symbol "hand" with various religious figures.