The UP Assembly election are being held in seven different phases and it has so far been reduced to a bitter tussle of defamation. 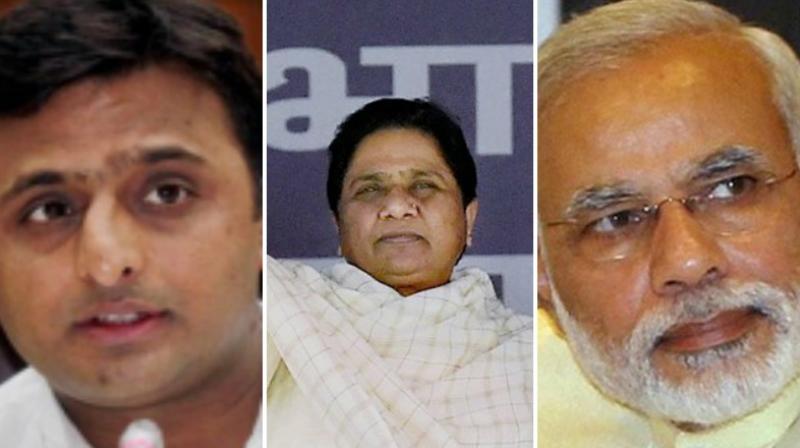 Lucknow: The battle for Uttar Pradesh Assembly election has intensified by manifolds and the comments hurled between the stalwarts of each of the contesting parties testify to that.

From mentions of previous scams, to distorting the name of the party to Behenji Sampatti Party to calling out on star endorsers for promoting 'gadhas', the slurs went no-holds-barred.

Bachchan had been the Gujarat tourism ambassador and in that discourse, he recently appeared in an ad campaign that showed the Wild Ass Wildlife Sanctuary. The 'donkey' from Akhilesh drove his point home.

Speaking of the discontent among Opposition parties on demonetisation, Prime Minister Narendra Modi, struck out at the Bahujan Samaj Party supremo Mayawati.

"Money started being deposited in banks all of a sudden (after note ban) and (Mayawati) started shouting as why is it only at election time that the account of her brother has been made public...why is it being discussed that Rs 100 crore have been deposited," he said.

"Arrey Behenji discussion not because elections are being held but because you have deposited Rs 100 crore after note ban...BSP is no longer Bahujan Samaj  Party...bahujan toh Mayawati me simat gaya hai...it is Behenji Sampatti Party now. Those who deposit wealth for themselves, can they solve your problem?" he asked.

He further added, "I have said SCAM stood for SP, Congress, Akhilesh and Mayawati...there is a leader who is seeing honesty and service in scam and had said for us scam is 'seva' do you need such service? You have an opportunity in this elections to throw out SCAM from Bundelkhand."

While Rahul Gandhi was not mentioned, Modi did not forget to warn Congress.

In retort to the 'behenji' comment Mayawati, in a rally at Sultanpura, said, "Do you know the full name of Modi? It's 'Narendra Damodardas Modi'. Narendra means negative, Damodardas means Dalit and Modi means Man - he is 'Negative Dalit Man', which implies that he is a 'Dalit Virodhi'."

The UP Assembly election are being held in seven different phases and the contest for majority in the 403 seat house has thus far been reduced to a bitter tussle of slander and defamation.