Steering clear of the controversy, Akhilesh exuded confidence that the SP-Congress alliance would form the next government in Uttar Pradesh. 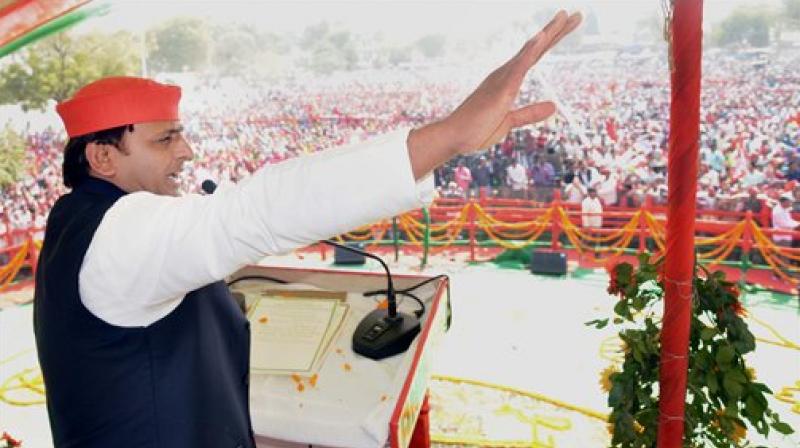 UP Chief Minister Akhilesh Yadav waves to the crowd at an election rally in Amethi. (Photo: AP)

Prajapati, a minister who has been booked on the directions of the Supreme Court, however, left the dais when Akhilesh arrived.

Party sources said the Chief Minister did not want to share stage with Prajapati and had asked the organisers of the rally to ensure that he was not present when he spoke.

Akhilesh, in his election rally at Gauriganj in Amethi district, did not make any reference to his controversial cabinet colleague during his entire speech.

On the directives of the Supreme Court, UP Police has filed an FIR against Prajapati, a senior SP leader, in connection with separate cases of gangrape and attempt to rape another woman and her minor daughter.

Opposition parties have made it a big issue with BJP targeting Priyanka Gandhi Vadra over her poll campaign in Rae Bareli for the Congress-SP alliance, saying it was unfortunate that she was seeking votes for those accused of "rape and murder".

Prime Minister Narendra Modi only yesterday raked up the Prajapati issue, saying at an election rally that the Supreme Court had to intervene to get the minister booked in an alleged rape case.

"The SC had to intervene to get the FIR registered against Gayatri Prasad Prajapati. 'Goonda raj' is prevailing all over UP and police stations have become Samajwadi Party office," Modi had said.

Steering clear of the controversy, Akhilesh exuded confidence that the SP-Congress alliance would form the next government in Uttar Pradesh.

"Samajwadi people have the habit of cycling against the wind. Out of enthusiasm, the Samajwadis tend to leave the handle of the 'cycle' (its poll symbol). But, with Congress holding the handle of the bicycle with its 'hand', the journey will be smooth," he said.