UP polls: Rebels challenging SP nominees in several seats may spoil the party? 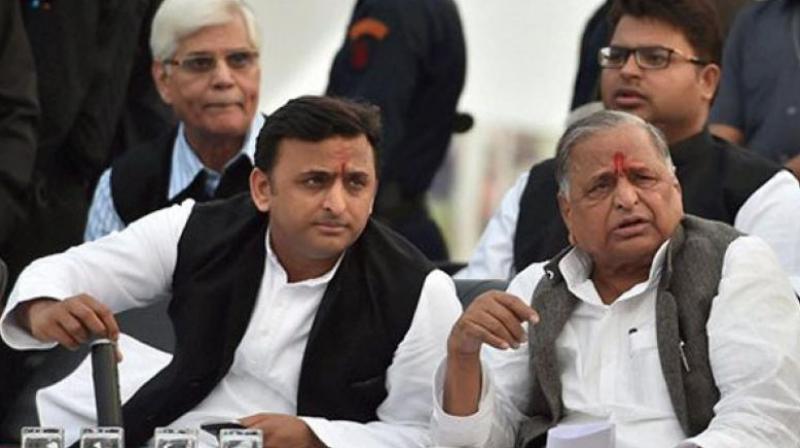 Lucknow: Rebels challenging official party nominees on many seats in Uttar Pradesh might queer the pitch for the Samajwadi Party. Bitter family feud in the Yadav family that created bad blood among workers at grassroot level also left them confused as to whom to back.

Many leaders close to Shivpal Yadav camp were denied tickets and new faces were accommodated triggering resentment that is palpable even now with almost half of the elections through.

This led to the rise of rebels who are making it difficult for the party candidates given tickets as official nominees.

Besides, the last minute alliance between SP and Congress, when filing of nominations were on, added to the confusion among the minds of ticket seekers and those very keen on contesting were left high and dry.

Samajwadi Party gave away 105 of the 403 Assembly seats to Congress, keeping the rest to itself under the eleventh hour pact, but many of its ticket seekers are still in the fray as rebels in these seats they had been nurturing all these years.

Ambika and Rai have been given BSP ticket from Fefna (Ballia) and Ballia Sadar respectively. Mishra, a sitting MLA from Ghazipur, is not contesting but supporting the BSP candidate there.

Another minister Shadab Fatima was also denied SP ticket from Zahurabad (Ghazipur). The ruling party fielded Mahendra in her place.

Though she is not contesting polls but her silence might affect winning prospects of the new SP candidate.

The situation is the same in a number of other constituencies where sitting MLAs, denied tickets, are either contesting as rebels or working half-heartedly for the official candidates.

However, discounting reports of SP facing trouble because of rebels, SP spokesman Rajendra Choudhary said, "The situation is no better in opposition camps, they too are facing the same predicament. It has become a level playing field, so to say."

In the same district, sitting SP MLA Rampal Yadav has joined Lokdal and contesting polls on its ticket.

Ashish is now a rebel candidate from the same seat and is contesting on RLD ticket. Ashish's ticket was cancelled in favour of Jugeshwar Yadav, brother of Rameshwar Yadav, an SP MLA from the Aliganj seat in Etah district who has a number of criminal cases registered against him. Jugeshwar also carries a 'bahubali' (don) image.

In Firozabad district, sitting Nishad MLA Om Prakash Verma was replaced by Sanjay Yadav, while at the Jasrana seat, sitting MLA Ramveer Yadav was dropped by the party in favour of Shiv Pratap Yadav, a first timer. Ramveer is now contesting as an Independent on the Jasrana seat.