Rahul alleged tModi did not help the people of Bihar when the state was hit by floods caused by the Kosi river. 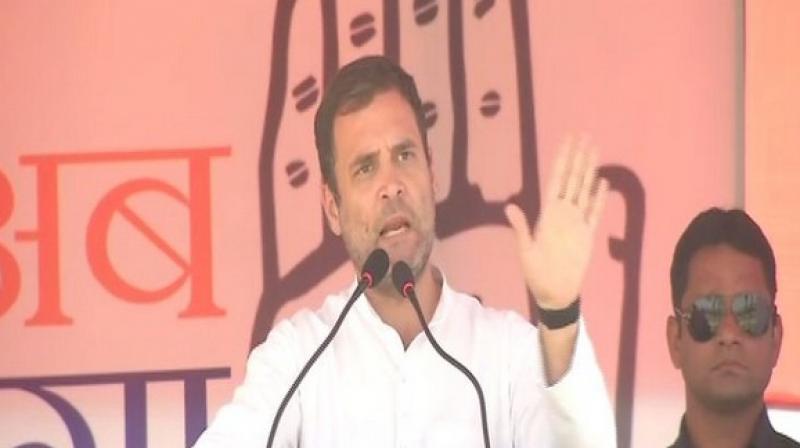 Rahul said that people of the country will dislodge Modi in the ongoing elections. "Voters are about to tell him to go and hug Anil Ambani (Picture: ANI twitter)

Bihar: Congress president Rahul Gandhi on Saturday said Prime Minister Narendra Modi was chowkidar (guard) of chors (thieves) and accused him of insulting the honest guards of Bihar by calling himself a chowkidar.

"Narendra Modi calls himself guard of the country but, in fact, he is a guard of Vijay Mallya, Anil Ambani, Mehul Chauksi, and Nirav Modi. Modi has given Rs 30,000 crore to Ambani. He has insulted the honest youth of Bihar who guards the nation," Gandhi said at a rally here.

Ambani has repeatedly refuted the charge.

He said, "The people from Bihar guard several banks across the country. A bank where the guard is a Bihari, there can never be theft in that bank."

Rahul alleged that Modi did not help the people of Bihar when the state was hit by floods caused by the Kosi river.

"He gave Rs 30,000 crore to Anil Ambani but did not give a single penny to the people of Bihar when floods hit Bihar."

Rahul said that people of the country will dislodge Modi in the ongoing elections. "Voters are about to tell him to go and hug Anil Ambani," he quipped.

"Wo to hai hi (that he is)," he said when some people started raising slogans of 'chowkidar chor hai'.

Gandhi reiterated his party's promise to probe the Rafale jet deal if they come to power.

He said: "The probe in Rafale case will soon begin. In the end, it will expose the names of two people -- Narendra Modi and Anil Ambani. And they will be punished."

The Congress president said that BJP promised to give Rs 15 lakh to each Indian but did not fulfil. He assured that if the Congress is voted to power, 5 crore families will get Rs 72,000 per year under Nyuntam Aay Yojna, a poll promise of the grand old party.

"Narendra Modi has waved off the loans worth Rs 5.5 lakh crore of 15 richest people of India. If the government can give money to Vijay Mallya, Nirav Modi, why can't the Congress give some money to the poor," he said.

Congress' Ranjeet Ranjan is the sitting MP from Supaul Lok Sabha seat. The constituency will go to polls on April 23. Counting of votes will take place on May 23.