'Incidents of harassment of Dalits, Muslims and Adivasis have also increased,' Mayawati said. 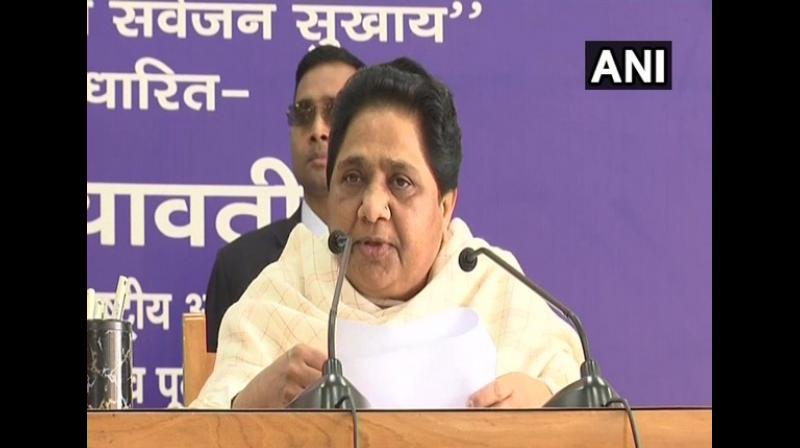 Mayawati slammed the BJP for promising big in the last general elections, but not fulfilling it in the last five years. (Image: File)

Rampur: Bahujan Samaj Party (BSP) chief Mayawati on Saturday accused Prime Minister Narendra Modi-led Central government of using central agencies against the political opponents to cover up its failure in delivering the promises made in the last Lok Sabha elections.

"Like the Congress party, they (BJP leaders) are also abusing CBI, ED and I-T Department against their political opponents to cover up their failures committed in the past five years," Mayawati said at a joint rally of SP-BSP-RLD alliance here.

She slammed the BJP for promising big in the last general elections, but not fulfilling it in the last five years.

Mayawati said: "Modi promised big to the poor, the youth, farmers, labourers, women, traders, Dalits, OBCs, Adivasis, and Muslims in 2014. But he did not fulfill even one-fourth of the promises."

The former Uttar Pradesh Chief Minister said that PM Modi-led government spent its energy and time to benefit the rich of the country.

"He spent most of the time and energy to benefit and defend his close associates and the rich," she added.

Mayawati said that sugarcane farmers had not been paid their dues and stray cattle had added the woes of farmers due to the cow vigilantism by Hindutva groups.

The BSP leader alleged that the incidents of harassment of Dalits and Muslims have soared since the BJP came to power in Centre.

She said: "Incidents of harassment of Dalits, Muslims and Adivasis have also increased."

Mayawati termed PM Modi calling himself a 'Chowkidar' (watchman) as a drama and urged the people to dislodge Modi and UP Chief Minister Yogi Adityanath from power at the Centre and the state respectively.

Mayawati slammed the Congress over its promise of providing Rs 6,000 per month to the poor families and asserted that only providing employment was a permanent solution to alleviate poverty.

"If we get a chance to form a government, we will try to provide permanent job in government and private sectors. This complex problem can only be solved by providing job to everyone and not with Rs 6,000 per month," she said.

She appealed to the people to vote for Rampur SP candidate Azam Khan who, according to Mayawati, gives a befitting reply to the 'communal' BJP and RSS in the elections.

The Samajwadi Party, Bahujan Samaj Party, and Rashtriya Lok Dal have formed an alliance in UP to defeat the BJP in the Lok Sabha polls.

As per the seat-sharing pact, the BSP, SP, and RLD are contesting on 38, 37 and 3 Lok Sabha seats, respectively.

The election in Rampur is slated to take place on April 23. The results will be announced on May 23.