Present generation of dynast is liability for Congress: Jaitley 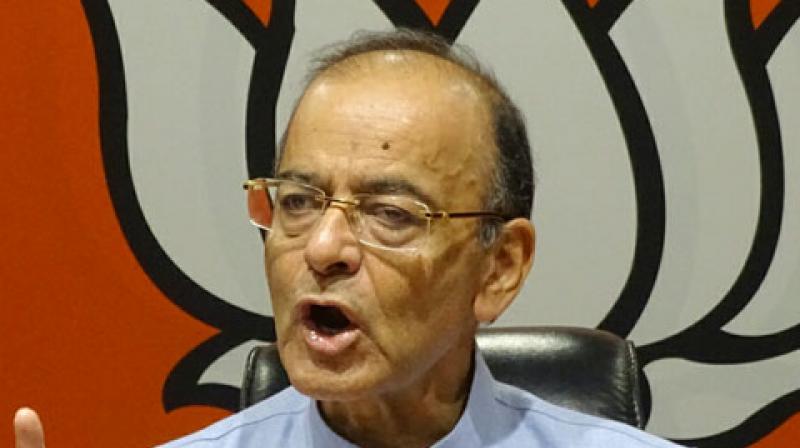 Jaitley added that with the socio-economic profile of the country moving up on account of growth, it would be difficult for people to accept dynasties. (Image: ANI)

New Delhi: Finance Minister Arun Jaitley Saturday said the "present generation of dynast" has become a liability for the Congress party and expressed hope that aspirational India would reject caste-based and dynastic parties during the ongoing general elections.

Jaitley added that with the socio-economic profile of the country moving up on account of growth, it would be difficult for people to accept dynasties.

"If the Congress's dynast has only an ability to deliver 44 seats or 60 seats in Parliament, what then is the incentive for conventional Congressmen to bear humiliation of subjecting themselves to a dynast? Ultimately, in dynastic parties one has to accept political slavery," Jaitley said in a blog titled, 'Will 2019 Witness the Dynasty as a Liability on the Congress Party?' The grand old party is led by Rahul Gandhi, grandson of Indira Gandhi and son of Rajiv Gandhi, and is assisted by his sister Priyanka Gandhi Vadra.

Jaitley said the two Prime Ministers that BJP gave to the nation -- Atal Bihari Vajpayee and Narendra Modi -- were by a mile the "tallest politicians of their generation", adding that this could happen only in merit-based parties and not dynastic ones.

"A relevant question with this changing socio-economic profile of India is - Are dynasties an asset for a party or are they a liability? Unquestionably, the present generation of dynast has become a liability rather than an asset for the Congress Party," he said.

Jaitley further said: "Is history going to witness something wholly unprecedented? Are we going to witness the rejection of caste based and dynastic parties? And will aspirational India make a harsh judgement on electing a merit based leadership? This may well be the case."

Referring to other dynastic parties, Jaitley said the Indian National Lok Dal (INLD)has splintered, while the Bahujan Samaj Party (BSP) got zero in the Lok Sabha elections in 2014 and 19 seats in the assembly elections.

The Samajwadi Party could only retain seats for its family members in the 2014 elections, while the RJD was down to two seats, he noted. Commenting on the first two phases of polling for the general elections, Jaitley said the momentum was clearly with the BJP and Prime Minister Modi.

"In terms of national leadership contest for a Prime Ministerial election, it is almost becoming a one horse race. There is nobody else measuring up to Prime Minister Modi's level of capacity and acceptability," he added.

The second phase of the Lok Sabha elections got over on Thursday, covering 95 constituencies in 11 states and union territory Puducherry.

As many as 91 constituencies went to polls in the first phase on April 11.

The seven-phased general elections would be completed on May 19.