The elected MLAs from both the parties are expected to attend the meeting. 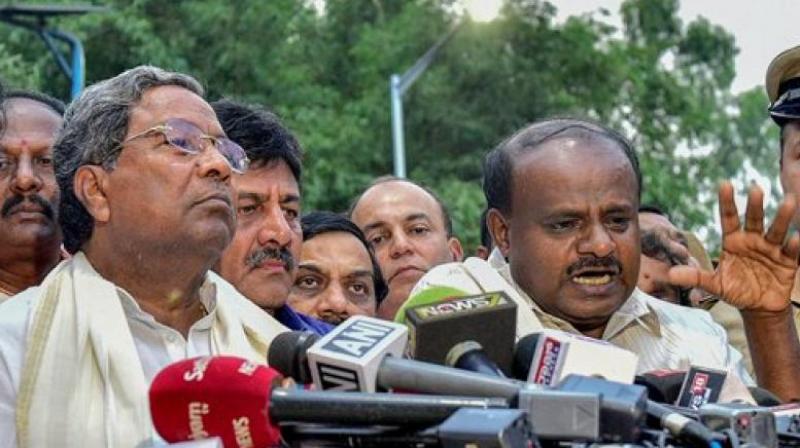 Leaders from the Congress and Janata Dal (Secular) will be meeting on Sunday to discuss the future of the alliance in the state assembly. (Photo: File/PTI)

Bengaluru: With H D Kumaraswamy all set to take oath as the Karnataka Chief Minister on May 23, leaders from the Congress and Janata Dal (Secular) will be meeting on Sunday to discuss the future of the alliance in the state assembly.

The elected MLAs from both the parties are expected to attend the meeting.

On Saturday, Kumaraswamy was invited by Karnataka Governor Vajubhai Vala to form the government in the state, after BJP’s B S Yeddyurappa stepped down ahead of the floor test in the state assembly.

While Kumaraswamy was earlier expected to swear-in as Karnataka Chief Minister on May 21, the ceremony later got pushed to May 23 due to the death anniversary of former prime minister Rajiv Gandhi.

"We are going to take oath on Wednesday as Monday is Rajiv Gandhi's death anniversary. That is not a proper date. In the entire country, all the Congress workers will be attending death anniversary functions. Conducting oath taking ceremony at that time is not good. In the today's meeting, we discussed this only. On Monday, we will discuss the oath ceremony," Kumaraswamy told news agency ANI.

On Saturday, Yeddyurappa announced his resignation as the chief minister ahead of the floor test in the Karnataka assembly.

However, in his speech inside the Vidhana Soudha, he said he will fight for the rights of the people of Karnataka till his last breath, even if he did not get the required mandate.

On Friday, the Supreme Court while hearing a petition of the Congress-JDS alliance reduced the 15-day time given by Governor Vala to the BJP to prove its majority in the house and asked the party to hold the trust vote on Saturday at 4 pm.

The top court on Saturday quashed the Congress-JD(S) petition to remove K A Bopaiah as pro-tem Speaker ahead of the floor test and appoint the senior most legislator R V Deshmukh in his place.

The apex court also ordered a live broadcast of the floor test to ensure transparency of proceedings.

While BJP managed 105 MLAs (including one Independent seat), they were still short of the halfway mark of 112 by seven MLAs.

Meanwhile, the Congress and the JD(S), apart from their own members, have claimed the support of one BSP member and an independent taking the total number with them to 117.