After controversial remarks, Pragya opts for 'silent' penance for 63 hours

Thakur, an accused in the 2008 Malegaon blast case, said she felt it was now time for some ‘soul searching’. 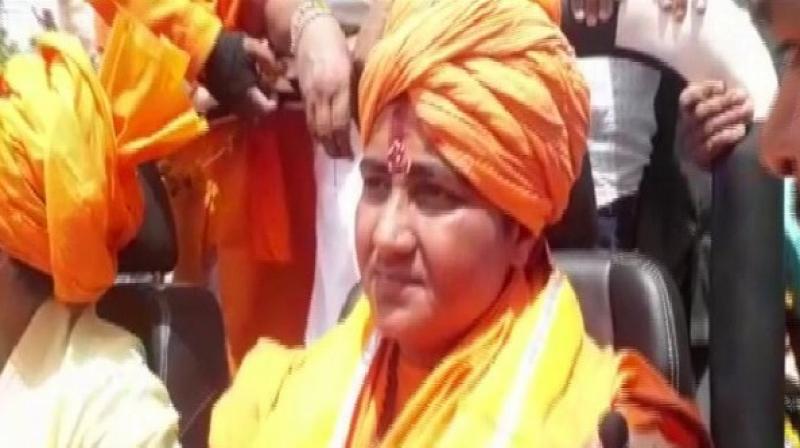 ‘As per the decorum of public life and to repent, I am observing a 21-prahar silence and will undergo hard penance,’ said Sadhvi Pragya Singh Thakur. (Photo: ANI)

Bhopal: BJP's Bhopal Lok Sabha seat candidate Pragya Singh Thakur, who recently kicked up a row with some of her remarks, on Monday, apologised for it and said she is observing "silence" for 63 hours as a mark of penance.

Thakur, an accused in the 2008 Malegaon blast case, said she felt it was now time for some "soul searching".

The BJP leader last week courted controversy by calling Mahatma Gandhi's assassin Nathuram Godse a "patriot". Prior to it, she claimed that the then Maharashtra ATS chief Hemant Karkare was killed in the 26/11 Mumbai terror attacks due to her "curse".

Taking a dim view of her remarks on Godse, the BJP said it did not agree with her.

An aide of Thakur told PTI that she began observing a '21 prahar maun' (63 hours silence) from Monday morning. Thakur, in a tweet, also apologised for her remarks.

"After the poll process, time has arrived for soul searching. During this period, if my words have hurt the patriots, I apologise for it. As per the decorum of public life and to repent, I am observing a 21-prahar silence and will undergo hard penance," she said in a tweet in Hindi.

Following some of Thakur's controversial statements, the Election Commission had imposed a 72-hour ban on her from campaigning in the Lok Sabha polls.