Exit polls projections have placed BJP at the top in UP and followed by the SP-BSP alliance. 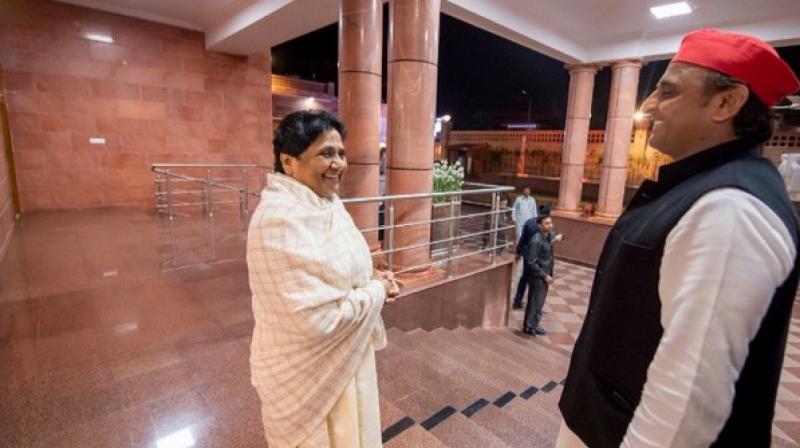 The result of the exit poll projections might have been the agneda behind the meeting held between the two leaders. (Photo: ANI)

Lucknow: Samajwadi Party chief Akhilesh Yadav and Bahujan Samaj Party supremo Mayawati held a meeting at the latter’s residence in Lucknow on Monday. This comes the day after the exit polls were released.

Sunday evening saw the calculation of the exit poll projections from various sources and most of them placing the NDA at the top of the list and followed by the SP-BSP alliance in the state of Uttar Pradesh.

This has been a matter of concern and that might have been one of the agendas of the meeting between the two leaders of the newly formed alliance in the state.

As part of the alliance agreement, the BSP had contested 38 seats and the SP 37 seats leaving 3 for a smaller RLD while deciding not to field any candidate in Rae Bareli and Amethi, the stronghold of UPA chairperson Sonia Gandhi and Congress president Rahul Gandhi respectively.

The meeting between the SP and BSP bosses on Monday came a day after exit polls projected 300 plus seats for the NDA in the 17th Lok Sabha. The exit polls showed the mahagatbandhan wresting several seats from the BJP in Uttar Pradesh where the saffron party had won 71 of the 80 seats.

Some exit polls predicted that the SP-BSP alliance is likely to trump the BJP in Uttar Pradesh. The C Voter-Republic forecast gave the grand alliance in UP 40 seats against 38 for the NDA, while the Jan Ki Baat said the NDA may win 46-57 seats against 15-29 of the SP-BSP combine.

ABP News predicted a huge loss for the BJP in the state, saying it may get only 22 seats while the opposition alliance may emerge victorious in 56 constituencies.

Bahujan Samaj Party president Mayawati on Monday appeared to be opting for a wait-and watch-policy till the Lok Sabha election results are announced on May 23.

"The future course of action will be decided only after the final results are announced. Till then, she (Mayawati) will be staying put in the state capital," a party source said, requesting anonymity.

Different exit polls have suggested that the SP-BSP-RLD alliance is all set to dent the Bharatiya Janata Party's 2014 tally in Uttar Pradesh, though it might not be able to throw a spanner in the formation of an NDA government at the Centre.

Against the backdrop of the exit poll projections, Samajwadi Party chief Akhilesh Yadav drove to the residence of Mayawati in the morning and held closed-door talks with her for about an hour.

Insiders in both the parties, however, were not ready to accept the projections that gave the BJP over 300 seats to form the government with a comfortable margin. "We (SP-BSP-RLD) should get nothing less than 55 seats as the alliance has done exceedingly well. We expect around 60 (out of 80) seats. We not agree with exit poll projections," another source said.

Meanwhile, with most of the BSP leaders preferring to remain in their respective districts after hectic electioneering, there was not much activity in the party camp here. "The party leaders will come to the state capital only after May 23. They have been asked to stay in their respective districts and oversee the counting process," a party leader said.

Aiming to check the return of NDA at the Centre, Mayawati had opted to sink decades-long differences to enter into an alliance with the SP for the Lok Sabha election.

In the 2014 general election, the BJP had won 71 seats, ally Apna Dal bagged 2, Samajwadi Party 5 and the Congress 2, while the BSP drew a blank. The BJP's impressive show in Uttar Pradesh helped the BJP to pull off a record 282 seats in the 543-member Lok Sabha to oust the Congress, which was decimated to just 44 seats.

With 80 Lok Sabha seats, Uttar Pradesh has the largest number of seats in the lower house of Parliament.