According to India TV-CNX Exit poll, the Bharatiya Janata Party is likely to repeat the 2014 victory when it had won all seven seats. 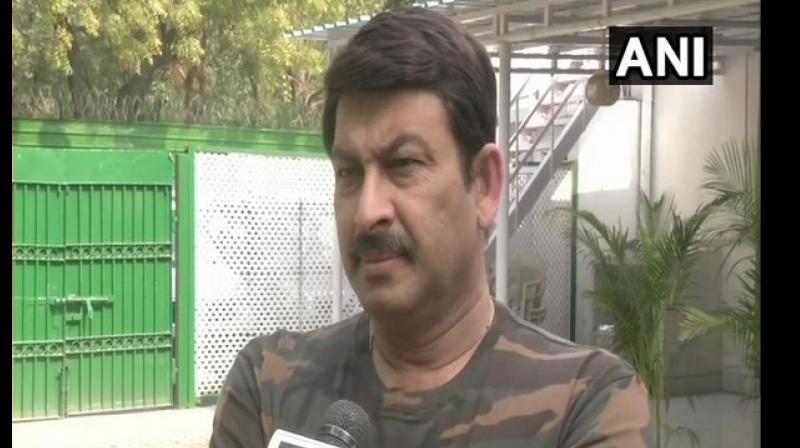 ‘As per the exit polls, we are winning all the seven seats in Delhi,’ BJP Delhi president Manoj Tiwari said. (Photo: ANI)

New Delhi: A day after exit polls predicted a clean sweep for the BJP in all the seven Lok Sabha seats in the national capital, the AAP and the Congress questioned the veracity of such an exercise before counting of votes even as an elated Delhi unit of the saffron party hoped that the predictions will come true.

Most exit polls predicted a sweep for the BJP with some predicting that the Arvind Kejriwal-led AAP may draw a blank in Delhi in the Lok Sabha polls whose results will be declared on May 23.

AAP Rajya Sabha MP Sanjay Singh raised questions over the entire process. "Is EVM the real game? Were the exit polls sponsored? BJP is winning in UP, Bihar, MP, Rajasthan, Chattisgarh, Gujarat, Maharashtra, Karanataka, Delhi, Bengal, who will believe it?All the parties should demand cancellation of the elections on irregularities of VVPAT-EVM match," Singh said in a tweet.

However, Delhi BJP president Manoj Tiwari thanked people of the national capital and hoped that the exit poll predictions will be replicated in the actual results. "As per the exit polls, we are winning all the seven seats in Delhi. We thank the people of Delhi for this trend and believe that the predictions will be replicated in the results of Lok Sabha polls on May 23," Tiwari said.

Some exit polls have projected that Congress may gain in Delhi by winning one seat. Senior Delhi Congress leader and party candidate from Chandni Chowk seat JP Agarwal said the predictions made by exit polls were "hard to accept".

"The predictions are far from the real picture. It is difficult to believe that the BJP will win majority of seats in states like MP, Rajasthan and Chhattisgarh where it recently lost the Assembly polls," said Agarwal.

It could be a big setback for the AAP if the projections of exit polls and the actual results are same.

Exit polls by News 18-Ipsos has projected six to seven seats for the BJP, and the Congress may gain by winning one seat.

Delhi witnessed a triangular contest among the BJP, AAP and the Congress.