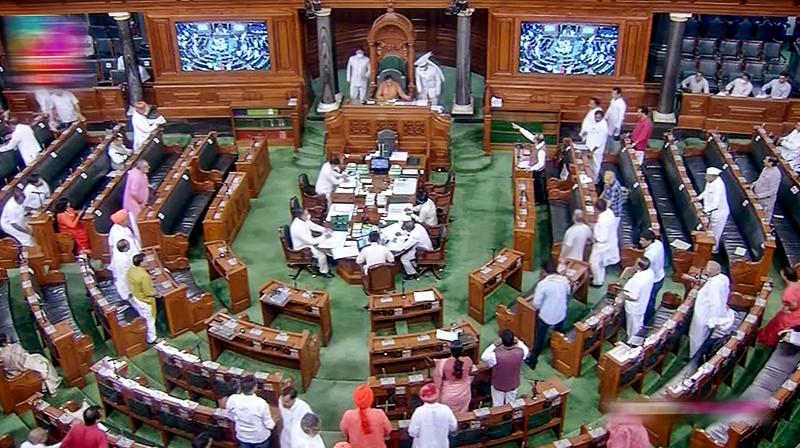 New Delhi: The Lok Sabha and the Rajya Sabha proceedings were hit for the second consecutive day on Tuesday due to protests by the Opposition members over the imposition of the goods & services tax (GST) on packaged food items, including rice and wheat and on the issue of price rise.

Reacting to the uproar from the Opposition as well as the common public over imposing an “unexpected” 5 per cent GST on pre-packaged and pre-labelled items from Monday, finance minister Nirmala Sitharaman on Tuesday clarified that the 14 food items like rice, flour, milk, curd, pulses, cereals etc, when sold loose will not attract any GST.

Defending the GST Council’s decision to impose 5 per cent GST on these daily-used items, Ms Sitharaman, in a series of tweets, said that the decision to levy tax on pre-packed and pre-labelled items was taken by the GST Council as a whole and not one member. “The GST_Council has exempt from GST, all items specified when sold loose and not pre-packed or pre-labelled. They will not attract any GST. The decision is of the @GST_Council and no one member,” she clarified.

However, the Opposition would have none of it and continued with their protests in both Houses of Parliament.

In the morning, as the Lok Sabha session began, the Opposition members belonging to the Congress, Trinamul Congress, DMK and other parties entered the well of the House carrying placards against the imposition of the GST on some new items.

They raised slogans against the Modi government over the issue of price rise. The placards read, “Gabbar Singh Strikes Again”. The Opposition has been describing the GST as the “Gabbar Singh Tax”, referring to the Bollywood blockbuster Sholay’s villain, Gabbar Singh, who used to illegally collect taxes from the villagers in the film.

Speaker Om Birla urged opposition members to return to their seats and stated that carrying placards inside the House is against the rules. He said since the House is discussing farmers’ issues, the members should participate in it.

“You carry rules book but don’t follow rules. The rules prohibit carrying placards here, but you are carrying them. You raise farmers’ issues outside the House but not inside. You raise the issue of price rise outside the House but not inside. In the last session, you did not participate in the debate on price rise. This is not good,” Mr Birla said.

As the Opposition members did not pay any heed to the Speaker’s appeal, he adjourned the House till 2 pm after about 15 minutes of proceedings in the morning. The Opposition persisted with their protests in the afternoon session as well, leading to the adjournment of the house for Wednesday.

The Rajya Sabha proceedings were also adjourned for the day on Tuesday as the Opposition continued to create commotion on price rise and the Agnipath scheme.

The morning session of the Rajya Sabha was adjourned till 2 pm as the Opposition parties created disruptions. When the House reassembled, deputy Chairman Harivansh asked external affairs minister S. Jaishankar to move The Weapons of Mass Destruction and their Delivery Systems (Prohibition of Unlawful Activities) Amendment Bill, 2022. However, the Opposition parties started raising slogans. The minister introduced the bill amid the uproar.

Though Mr Harivansh made efforts to bring order in the House, the Opposition did not yield. He then adjourned the proceedings till Wednesday morning.

Recently, the GST Council in its 47th meeting recommended to reconsider the approach for imposition of GST on specified food items like pulses, cereals, flour etc. “There have been a lot of misconceptions about this that have been spread,” Ms Sitharaman said, in a twitter thread to “lay the facts”.

“Is this the first time such food articles are being taxed? No. States were collecting significant revenue from foodgrain in the pre-GST regime. Punjab alone collected more (than) Rs 2,000 crore on food grain by way of purchase tax. UP collected Rs 700 crore,” Ms Sitharaman pointed out.

“This was resented by suppliers and industry associations who were paying taxes on branded goods. They wrote to the Govt to impose GST uniformly on all packaged commodities to stop such misuse. This rampant evasion in tax was also observed by States,” she said.

“The Fitment Committee, consisting of officers from Rajasthan, West Bengal, Tamil Nadu, Bihar, Uttar Pradesh, Karnataka, Maharashtra, Haryana & Gujarat had also examined this issue over several meetings and made its recommendations for changing the modalities to curb misuse,” she added.