Mr Channi, who has a law and an MBA degree, was amongst the four Cabinet ministers who had rebelled against Capt Amarinder Singh last month 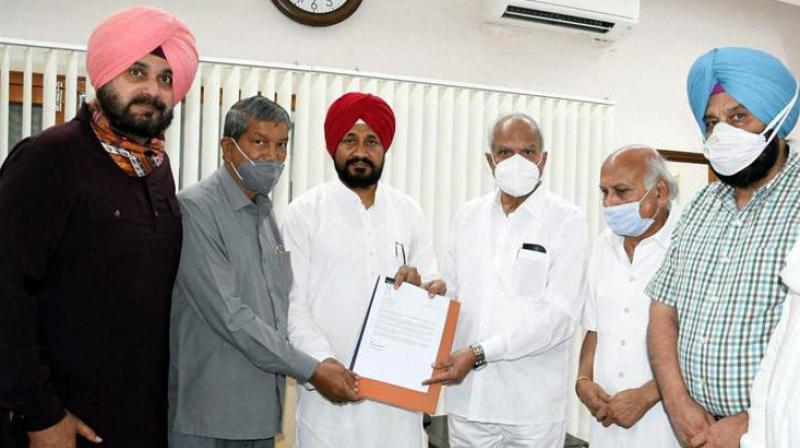 New Delhi: After 24 hours of tense drama, the Congress finally announced the name of Charanjit Singh Channi as the next chief minister of Punjab to replace Captain Amarinder Singh who had resigned on Saturday evening.

Mr Channi, 58, is a three-time MLA and the first Dalit chief minister of the state. Technical education minister in the outgoing Captain Amarinder Singh Cabinet, he was also the leader of Opposition in the Punjab Assembly. In the Assembly, he represents the Chamkaur Sahib constituency.

As Punjab has the largest percentage of Dalits, the Congress wants to capitalise on appointing the first Dalit chief minister in the state that is due to go to polls early next year.

Mr Channi was accused of sexual harassment by a woman IAS officer for allegedly sending an inappropriate text in 2018, but the officer didn't file a complaint. The claim resurfaced in May after the state's Women's Commission sent a notice asking for the state government's response.

Mr Channi, who has a law and an MBA degree, was amongst the four Cabinet ministers who had rebelled against Captain Amarinder Singh last month, demanding a change in the leadership.

Congress general secretary incharge of Punjab, Harish Rawat, tweeted on Sunday, “It gives me immense pleasure to announce that Sh. Charanjit Singh Channi has been unanimously elected as the Leader of the Congress Legislature Party of Punjab."

However, heavy drama ensued during the day before selecting Mr Channi. The first choice of the Congress high command was 78-year-old party loyalist Ambika Soni who politely refused the offer citing health reasons. However, she went on to add that a Sikh chief minister will be more suitable for Punjab. Speaking to the media, she said, “I have turned down the offer (to become the next chief minister of Punjab). It has been my belief, not from today but since the past 50 years, that the main face or the chief minister of Punjab should be a Sikh.” Many in the party feel that the real reason she turned down the offer is that she did not want to be a “night watchman”.

After Ms Soni’s refusal and insistence on a Sikh, the name of former state unit chief Sunil Jakhar was also ruled out. The next contender for the top job in the state was Sukhjinder Singh Randhawa, a minister in Captain Amarinder Singh’s government. But his nomination was reportedly vetoed by the state unit chief, Navjot Singh Sidhu. Finally the high command settled on the Dalit leader Mr Channi, bearing in mind that the Bahujan Samaj Party (BSP) is in a pre-poll alliance with the Akali Dal in Punjab. Insiders claim that it is possible that Mr Channi may not be the CM face after the elections, in case the Congress wins.

Mr Channi will be sworn in on Monday morning and insiders claim that two deputy chief ministers may also be sworn in along with him.

With the swearing in, the Congress hopes to put at rest the turbulence in the party that has been going on for the last four months.

Captain Amarinder Singh extended his best wishes to Mr Channi for being elected as his successor in the state. He had vowed to fight tooth and nail if Mr Sidhu was made the chief minister by the party.

Trouble in the Congress’ Punjab unit started when the high command appointed Mr Sidhu as the state unit chief against the wishes of Captain Amarinder Singh. Things got out of hand when Mr Sidhu started his public outbursts against Captain Singh.

Emboldened by the state unit chief, several MLAs and ministers of the government started an open rebellion. Within a month, a “humiliated” Captain Amarinder Singh was forced to resign.

With the Assembly elections now just about four months away, the Congress hopes to start with a clean slate with a new chief minister and a new Cabinet.