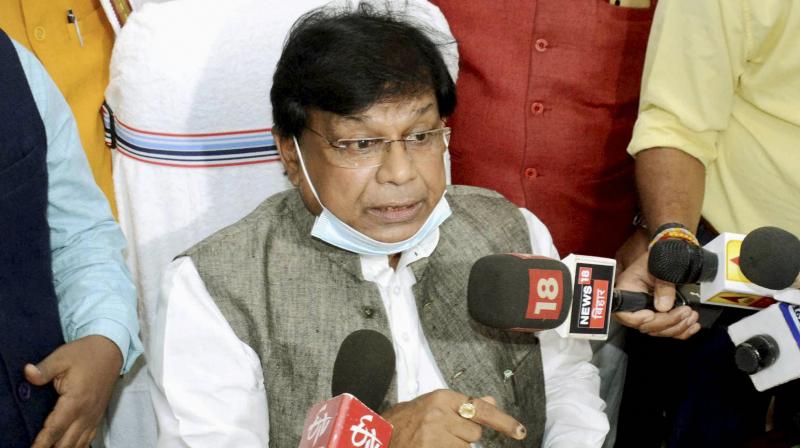 Bihar Education Minister Mewalal Choudhary addresses the media after resigning from his post following corruption allegations against him, in Patna. (PTI)

Patna: Bihar Education Minister Mewalal Chaudhary on Thursday resigned from the post after being slammed for corruption charges.

Mewalal Chaudhary has been facing flak from the opposition parties, especially the RJD, ever since he took oath as the cabinet minister along with Chief Minister Nitish Kumar on November 16. Speaking on the issue of his resignation, Mr. Chaudhary said, “Accusations can only be proved either after a charge sheet is filed or the court passes an order and in my case, nothing has happened. The matter is still under investigation”.

He also slammed Tejashwi Yadav, for raising questions against him and said that “he has no right to point fingers at me as he himself is facing a series of corruption charges”,

In a series of tweets earlier Tejashwi Yadav had blamed Bihar Chief Minister Nitish Kumar of appointing ministers who have corruption and criminal cases pending against them.

A case was filed against Mewalal Chaudhary in 2017 on the basis of reports that highlighted irregularities in the appointment of assistant professors and junior scientists during his tenure as the Vice-Chancellor of Bihar Agriculture University, Sabour in Bhagalpur district.

Reports suggest that the case is still pending against him in the court of Additional District and Sessions Judge – I Bhagalpur and matter is being investigated by the vigilance department.

After an FIR was filed against him the JD(U) had suspended him for a brief period, however, he was made the party candidate from Tarapur assembly seat during the state elections this year.

While attacking Bihar CM Nitish Kumar after Mr. Chaudhary’s resignation on Thursday, RJD leader Tejashwi Yadav in a tweet said that “we have got the mandate to warn you about your corrupt policies, intentions and rules. One resignation is not enough. We will continue to keep a tab on many issues of public concern like 19 Lakh job promise, contractual workers and equal work- equal pay issue”.

Mr. Chaudhary had to resign from his post within hours of resuming office on Thursday after Chief Minister Nitish Kumar intervened.

“Mewalal Chaudhary’s resignation proves that Nitish Kumar doesn’t compromise on the issue of corruption. But those who were raising questions on the policies of Nitish Kumar, will they ask Tejashwi Yadav to resign because he is also facing serious corruption charges”, Hindustani Awam Morcha spokesperson Danish Rizwan said.