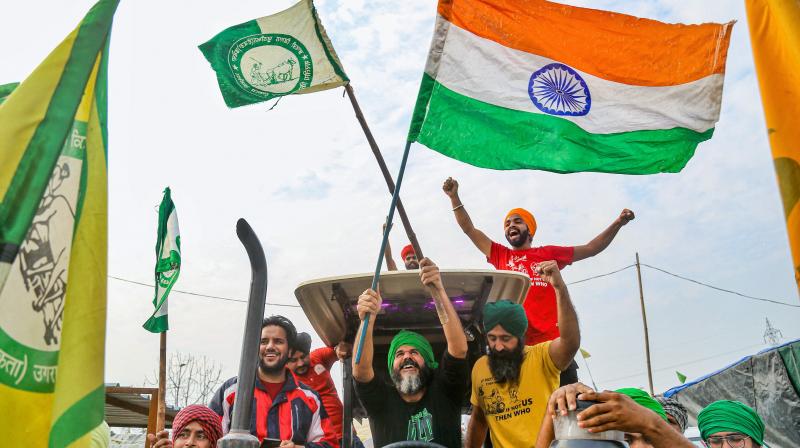 New Delhi: It took a year of peaceful and unrelenting protests, more than 700 deaths and predictions of electoral losses in Punjab, Uttar Pradesh and Uttarakhand for the Bharatiya Janata Party-led government at the Centre to rollback the three contentious farm laws. In a televised statement early on Friday, Prime Minister Narendra Modi announced the repeal of the three farm laws after apologising to the people of the country, saying that his government had "failed to convince a section of farmers" over the farm laws.

Wishing Sikhs and the nation on the occasion of Gurpurab, birth anniversary of Guru Nanak, the PM said, “Today I have come to tell you, the whole country, that we have decided to withdraw all three agricultural laws. In the Parliament session starting later this month, we will complete the constitutional process to repeal these three agricultural laws.”

The PM said that though the idea behind the three laws was the welfare of farmers, somehow his government failed to make them understand the benefits of these laws. He urged the protesting farmers to return to their homes and fields.

Celebrations broke out at the two main protest sites on Delhi's border where farmers have been protesting since November 26 last year. Supporters from Delhi and neighbouring areas distributed sweets among the protesting farmers who said they will not move till the repeal of the three farm laws is final and formal.

The next session of Parliament is scheduled to commence on November 29.

Opposition parties have linked the government's announcement to repeal the three laws to the upcoming Assembly elections. Several opinion polls had indicated that the huge agrarian vote bank, which is to play a decisive role in state polls, may not go entirely against the BJP because of the way the government has dealt with the farmers' protest. In fact, the BJP’s own senior leader and Meghalaya governor Satya Pal Malik said his party will suffer huge electoral losses in UP and other states due to the farmers protests in which several have died and yet thousands continued to live on roads braving unbearable heat, biting cold wave and torrential rains for over a year.

While the rollback is being seen as a major victory for the farmers, their unions remained cautious in their response. Responding to the PM’s announcement, Samyukta Kisan Morcha said they will wait for the announcement to take effect through due parliamentary procedures. “If this happens, it will be a historic victory of the one-year-long farmers' struggle in India. However, nearly 700 farmers have been martyred in this struggle. The Central government's obstinacy is responsible for these avoidable deaths, including the murders at Lakhimpur Kheri,” the SKM said in a statement.

“SKM also reminds the Prime Minister that the agitation of farmers is not just for the repeal of the three black laws, but also for a statutory guarantee of remunerative prices for all agricultural produce and for all farmers. This important demand of farmers is still pending. So also is the withdrawal of the Electricity Amendment Bill. SKM will take note of all developments, hold its meeting soon and announce further decisions,” the statement said.

On June 5, 2020, the President of India promulgated three ordinances­ that were the precursors to the three farm laws -- The Farmers Produce Trade and Commerce (Promotion and Facilitation) Act, 2020; The Farmers (Empowerment and Protection) Agreement on Price Assurance and Farm Services Act, 2020; and The Essential Commodities (Amendment) Act, 2020. These three ordinances were passed by Parliament in September 2020 and farmers' protests began soon after.

Since the protests moved to Delhi's border, there was a concerted effort from the government and certain sections of the media to taint the farmers and their peaceful protest. The farmers were called "Khalistani terrorists", including by some ministers in the Modi government. It was alleged that they were being supported by the Congress and other Opposition parties. Their civil society supporters were called the "tukde tukde gang", and on January 26 this year, when farmers organised a rally in Delhi, the city was fortified with armed security forces and barricades as if the nation's capital were facing a hostile enemy.

While the rally was mostly peaceful, the government latched on to the transgression of a few who hoisted a Khalsa flag outside Red Fort. Criminal cases were registered against farmers and their supporters and a narrative was sought to be created that the farmers had "international" backing. Disha Ravi, a 22 year old climate activist, was charged with sedition and sent to jail for 10 days for creating a communication plan to support the farmers' protest.

In a blatant abuse of power at the protest sites -- especially Singhu and Tikri border -- all sorts of tactics to intimidate and agitate the farmers were used. Trenches were dug, there was increased barricading, including by barbed wire, armed battalions would arrive with busses late at night, electricity and water supply was shut, and there were frequent Internet shutdowns. In a memorable moment from the peaceful protest, long nails were fixed in the ground to puncture the tractors and other vehicles carrying protesters and supplies. Some farmers planted marigold around those nails. And in early October, a jeep allegedly driven by the son of Union minister Ajay Mishra, ran over and killed four protesting farmers.

On Friday, Bharatiya Kisan Union leader Rakesh Tikait offered tributes to those who died during the farmers protests and said, “It is a win after a long one year… the hard work of the farmers has paid off.”

What eventually tipped the scales in favour of the protesting farmers was that their rage against the government was going to have a significant impact on the BJP's prospects in Uttar Pradesh, Punjab and Uttarakhand Assembly elections.

Mr Modi said on Friday that ever since he became Prime Minister in 2014, his government had given the highest priority to agriculture development and farmer welfare. “We not only increased the MSP, but also created a record number of government procurement centers. The procurement of the produce made by our government has broken the records of the last several decades,” he said.

Making another announcement, the PM said the Union government has announced the formation of a committee to promote zero budgeting based agriculture, to change crop pattern as per the changing needs of the country and to make MSP more effective and transparent. The Committee will have representatives of the central government, state governments, farmers, agricultural scientists, and agricultural economists.