The CM said that his government would adopt a zero-tolerance policy towards corruption. 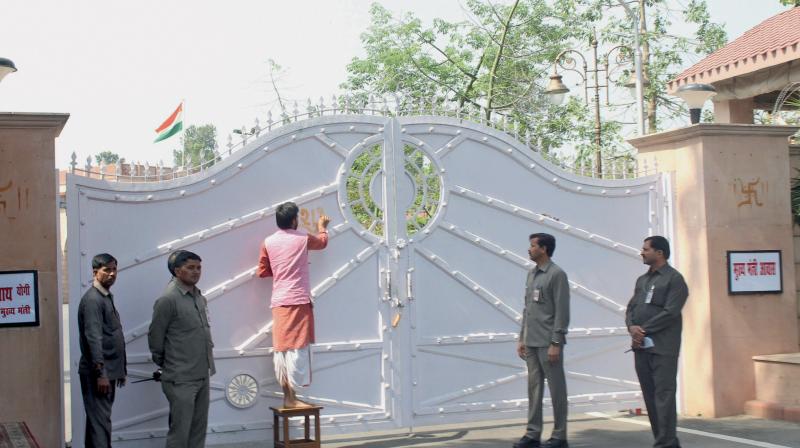 A priest paints “swastika” and “OM” signs outside the official bungalow of new UP chief minister Adityanath Yogi in Lucknow. (Photo: PTI)

Lucknow: A day after being sworn in, Uttar Pradesh chief minister Adityanath Yogi directed all government officials to provide details of their movable and immovable properties and assets to the state government within 15 days. This follows a similar order to ministers after he assumed office Sunday.

At his first meeting with senior officials of all departments, the CM said that his government would adopt a zero-tolerance policy towards corruption.

The CM, accompanied by deputy CMs Dinesh Sharma and Keshav Prasad Maurya, distributed copies of the BJP Sankalp Patra (manifesto) and asked officials to study the same and ensure its implementation at the earliest.

The meeting was attended by around 65 senior officials who were given copies of the manifesto to prepare a roadmap for their respective departments, a senior BJP leader said. The manifesto includes a loan waiver to farmers and a ban on mechanised slaughter houses. The CM also summoned DGP Javeed Ahmad and asked him to ensure that there was no laxity in improving the law and order situation, hours after a BSP leader was shot dead in Allahabad. Official sources said the CM expressed concern over the attack, and stressed that restoring law and order was the top priority of his government.

The DGP has been asked to hold video-conference meetings with the DMs and the SPs of all 75 districts of the state to take stock of the law and order situation and other administrative issues.

A 47-member council of ministers, including two deputy CMs, was administered the oath of office and secrecy by governor Ram Naik Sunday.The portfolios to the new ministers are likely to be announced soon.

Meanwhile, eleven priests from Gorakhpur and Allahabad performed a 3-hour puja and havan at the CM’s official residence at 5, Kalidas Marg here on Monday. A priest was also seen making religious markings on the gate of the residence after the puja.

The CM moved into his official residence on Monday evening. After being sworn in, he had been staying at the VVIP guest house.