The BJP’s dilemma on selection of candidate is also because of Congress putting up its tallest leaders into fray. 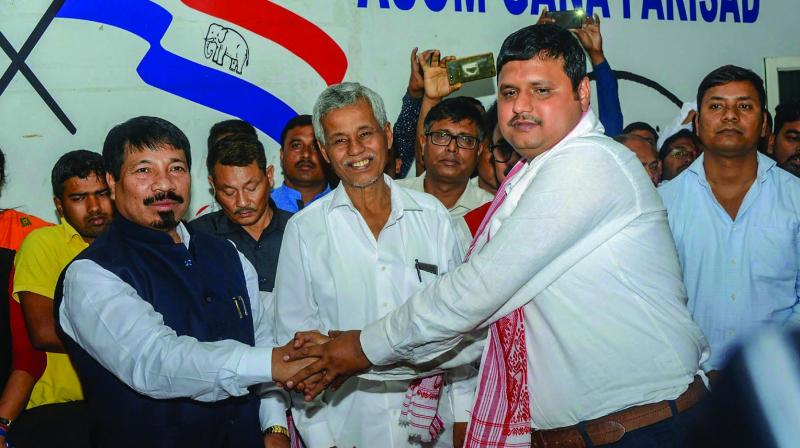 Guwahati: Even after the notification for the first phase of polling in Assam, the ruling BJP was not able to announce the list of candidates on Wednesday amidst speculation of several sitting MPs not getting nomination because of their poor performance in past five years.

The BJP parliamentary board, which met last week, has decided to drop five sitting MPs from the party’s probable list of candidates for Assam. While the party has not finalised any candidate for Tezpur seat after rejecting state minister Himanta Biswa Sarma’s candidature, the names of at least two BJP leaders — Rajen Borthakur and Ritubaran Sharma — are doing the rounds.

Indicating that the name of sitting MP Ramen Deka, who was denied ticket from his present Mangaldoi seat, is being considered for prestigious Guwahati Lok Sabha seat, the party sources said that party is also yet to find a replacement for union minister of state Rajen Gohain in the Nagaon seat. Mr Gohain’s name was dragged into a rape case. Sources said that the RSS has been putting pressure on the party to nominate Ramen Deka as a candidate for Mangaldai, and adjust him in the Guwahati seat.

The party is also in a fix on Tezpur Lok Sabha seat on which state finance minister Himanata Biswa Sarma wanted to contest. The sitting BJP MP R.P. Sarma who was denied ticket has gone all out against the state leadership of the party.

The BJP’s dilemma on selection of candidate is also because of Congress putting up its tallest leaders into fray.

The Congress has already announced candidates in Assam for nine Lok Sabha seats —Koliabor, Silachar, Karimganj, Jorhat, Dibrugarh, Mangaldai, Nagaon, Tezpur and Lakhimpur. The Congress heavy weight Bhuwneshwar Kalita has been nominated from Mangaldoi constituency and former power minister Pradyut Bordoloi will be contesting from Nagaon. Former bureaucrat MGVK Bhanu has been fielded from Tezpur while Anil Borgohain will be the Congress nominee from Lakhimpur.

The regional Asom Gana Parishad, which is contesting the elections in alliance with BJP, has also announced candiates for three seats thjat they are going to contest. Former AASU vice president Mani Madhav Mahanta will be the party’s nominee from the Kaliabor seat, while senior leader and former Rajya Sabha member Kumar Deepak Das will contest from Barpeta and former MLA Zabed Islam will be the AGP candidate from Dhubri Lok Sabha seat. (EOM)