India   Politics  21 Mar 2021  Mamata can kick me but not development: Modi
India, Politics

Mamata can kick me but not development: Modi 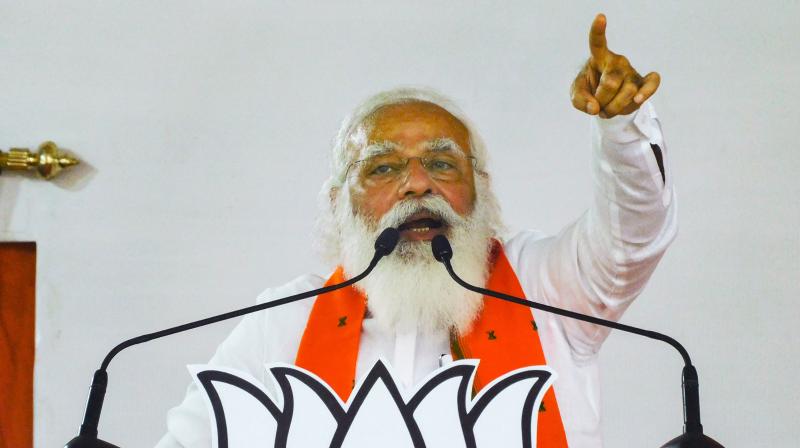 Modi’s assertion came as Bollywood star Mithun Chakraborty, who joined the BJP recently, is likely to become a voter at the Cossipore-Belgachhia Assembly seat in north Kolkata. (Photo: PTI)

Kolkata: Daring West Bengal chief minister Mamata Banerjee to put her leg on his head and “kick” him, Prime Minister Narendra Modi made it clear on Sunday that he would not allow the Trinamul Congress boss to “kick” away the state’s development any further.

Mr Modi’s assertion came as Bollywood star Mithun Chakraborty, who joined the BJP recently, is likely to become a voter at the Cossipore-Belgachhia Assembly seat in north Kolkata, where his relatives stay so that he can be fielded by the saffron party as a heavyweight candidate to contest the polls.

Addressing a mega BJP rally in Bankura, the PM said: “I saw nowadays followers of Didi are making wall paintings on her. In the pictures, Didi is seen trampling on my head and playing football with it. Why are they insulting the rich culture and tradition of Bengal? I want to tell certain things clearly to her. I always keep my head bowing down to the service of 130 crore citizens of the country as a mark of respect. This is the culture a great son of Bengal, Syama Prasad Mookerjee, taught me and my party.”

Sending a strong warning to Ms Banerjee, Mr Modi added: “So Didi, if you wish at all, you can keep your feet on my head. Didi, you can even kick me. But listen to my words with all ears. I will not let you kick the development of Bengal any longer.” He threw the challenge to the two-time CM after she boasted of her footwork despite her injured leg and threatened to “kick out” the BJP from the state like a football in the Assembly polls.

In his second campaign visit to the poll-bound state within 24 hours, the PM also wondered how TMC leaders could become malamaal (wealthy) by acquiring huge properties in the past one decade instead of ushering in any development and public welfare. Seeking to know the source of such funds, he also ridiculed Ms Banerjee for not having any satisfaction and still offering the slogan “Khela Hobe” (Game On) after playing with the state for 10 years.

“Like many BJP workers became martyrs during the TMC’s rule, many leaders of Didi’s party became malamaal. Big cars and houses! On whose money were they bought, Didi? Isn’t it the money of the poor who were looted? Shouldn’t Didi go out from power for this?” Mr Modi asked the crowd.

Tearing into the ruling TMC for blocking many Central projects in the state, the PM claimed: “The BJP moves on schemes while TMC survives on scams. A scheme is implemented irrespective of any government that has brought it. But the TMC somehow finds out ways for scams. The TMC’s mantra is that scam is where scheme is. They have painted those schemes, which were supposed to be delivered through the state government to the people, in scams. They refused to implement schemes like Ayushman Bharat, PM Kisan Samman Nidhi and Direct Bank Transfer initiative because they could not do any scam in them.”