No one with clean image in BJP, hence Pragya Thakur given ticket: Baghel

Thakur is pitted against senior Congress leader Digvijiya Singh from the Bhopal seat. 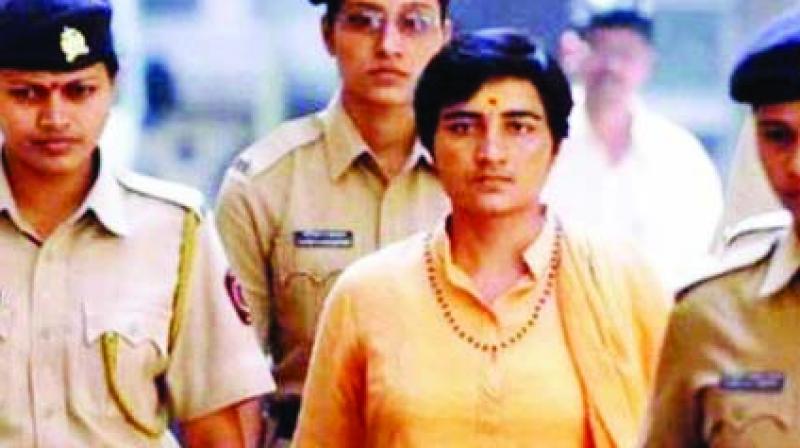 Thakur is out on bail in the 2008 blast case and she is under fire for claiming that IPS officer Hemant Karkare was killed during the 26/11 Mumbai terror attack as she had cursed him for torturing her. (Photo: File)

Balodabazar: Chhattisgarh Chief Minister Bhupesh Baghel Saturday alleged that the BJP had no one with a "clean image" and so it had to field Pragya Singh Thakur, an accused in the Malegaon blast case, from the Bhopal Lok Sabha seat.

Thakur is out on bail in the 2008 blast case and she is under fire for claiming that IPS officer Hemant Karkare was killed during the 26/11 Mumbai terror attack as she had "cursed" him for "torturing" her.

Thakur, who is pitted against senior Congress leader Digvijiya Singh from the Bhopal seat, has apologised for her remarks.

"She has filed her nomination against Congress leader Digvijaya Singh.The BJP did not have any other candidate so it has fielded a 'gunda mavali' (goon) who had indulged in spreading terror," Baghel said while addressing an election rally at Chhattisgarh's Tundra here.

On Thakur's remark on Karkare, he said, "She had said that Karkare died because she cursed him.Terrorists had killed him. It seems she was hand in glove with the terrorists."

Speaking to reporters after the rally, Baghel alleged that Thakur had attacked a man with a knife when she was living in Bilaigarh town in Balodabazar district in 2001-2002 and claimed local people had also told him about the incident.

The BJP has refuted the charges, saying Baghel was making baseless allegation for "political gains".

"She has been jailed for her acts. For the first time, she was jailed in Madhya Pradesh in 2008 during chief minister Shivraj Singh Chouhan's tenure. The BJP does not even have an appropriate candidate who has a clean image," Bhagel said.

He said that a person, who has been "involved in violent and terrorist activities and wanted to divide the nation, has been made a candidate by the party (BJP)". "What are they (BJP) doing," Baghel said.

"Prime Minister Narendra Modi and BJP chief Amit Shah should apologise to the nation for her statement on Hemant Karkare. The entire country salutes the martyrdom of Hemant Karkare," he said.

"The allegations are false. Sadhvi Pragyaji had given a statement before public and now has taken it back. The matter is over now. The CM is levelling false charges on her for political gain," he told PTI.

Thakur had made the remarks on Karkare in an election rally in Bhopal on Friday and apologised for her comments in a public meeting in Madhya Pradesh's Berasai area the day after.

Thakur has been discharged by a court on charges under the stringent Maharashtra Control of Organised Crime Act (MCOCA) in the 2008 blast case, but is still facing trial under other criminal provisions, including the Unlawful Activities (Prevention) Act.