India   Politics  21 May 2018  Kumaraswamy likely to have 2 deputies; Cong may get 20 cabinet berths
India, Politics

Kumaraswamy likely to have 2 deputies; Cong may get 20 cabinet berths

Kumaraswamy will be meeting Sonia, Rahul Gandhi today; decision on cabinet formation to be taken during meet. 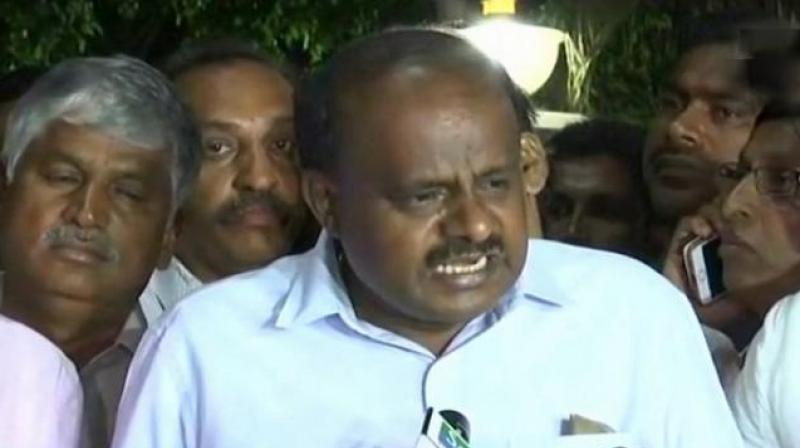 The Congress-JD(S) alliance is said to be mulling over a 20-13 formula to share cabinet berths. (Photo: ANI/Twitter)

Bengaluru: With the date for swearing-in of the coalition government in Karnataka fast approaching, Congress and JD(S) have got down to the business of power-sharing and portfolio distribution.

According to reports, there is a strong possibility that Karnataka CM designate H D Kumaraswamy will have two deputies and the Congress, which won 78 seats in comparison to JD(S)’ 38 seats, will get a maximum number of berths in the 33-member state cabinet.

However, a final call on all these issues will be taken after Kumaraswamy meets Sonia Gandhi and Congress president Rahul Gandhi in New Delhi today.

The Congress-JD(S) alliance is said to be mulling over a 20-13 formula to share cabinet berths. The Congress will get 20 cabinet posts while JD(S) will take 13.

Kumaraswamy is likely to keep finance portfolio with himself. However, Congress will demand other key portfolios, including home, and an important portfolio for its leader D K Shivakumar, who played a significant role in safeguarding the MLA's for alleged poaching by the BJP.

It is also said that Kumaraswamy will have two deputy chief ministers.

G Parameshwara, chief of Karnataka Congress and a Dalit leader, is the front-runner for the post. However, there are reports that suggest there is growing demand from party leaders in north Karnataka that the position be given to a Lingayat from the region, as the chief minister's post is held by a Vokkaliga from the southern part of the state.

Akhila Bharata Veerashaiva Mahasabha, the apex body of Veerashaiva-Lingayat faith, has demanded that the Congress high command appoint its national president Shamanur Shivashankarappa as deputy chief minister. Congress is likely to accept the demand to get rid of the anti-Lingayat tag it had earned post-Siddaramaiah government’s efforts to give it a minority religion tag.

However, Kumaraswamy will take oath on Wednesday alone. The rest of his cabinet will sworn-in after trust vote.

K C Venugopal, Congress general secretary and in charge of Karnataka, said: “Kumaraswamy alone will take oath as chief minister on Wednesday and he will take the floor test on Thursday. The election of a speaker will also happen on the same day.”

The two parties will also draw up a Common Minimum Programme to earmark the key governance issues of the southern state and ensure a stable government in the state, Kumaraswamy had said earlier.