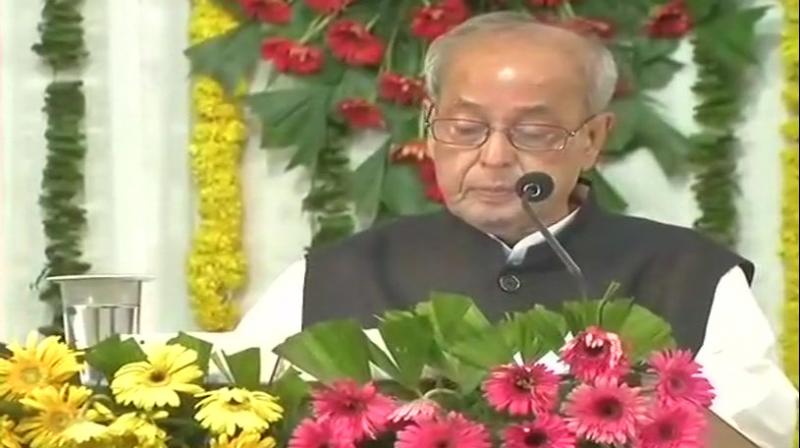 ‘There can be no room for speculations that challenge the very basis of our democracy. People's mandate is sacrosanct and has to be above any iota of reasonable doubt,’ President Pranab Mukherjee said. (Photo: Twitter/@RSSorg)

New Delhi: A day after praising the Election Commission for conducting "perfect" polls, former President Pranab Mukherjee on Tuesday expressed concern over reports of alleged tampering of EVMs and asked the poll body to put all speculations to rest.

Issuing a statement on Twitter, he said, "I am concerned at reports of alleged tampering of voters' verdict. The safety and security of EVMs which are in the custody of ECI is the responsibility of the Commission."

"There can be no room for speculations that challenge the very basis of our democracy. People's mandate is sacrosanct and has to be above any iota of reasonable doubt," Mukherjee said.

He said the onus on ensuring institutional integrity in this case (security of EVMs) lay with the Election Commission of India (ECI). "They must do so and put all speculations to rest."

The former President said as a firm believer in the country's institutions, it was his considered opinion that it is the workmen who decide how the institutional tools perform.

His statement came a day after Mukherjee praised the role of the poll panel right from the first Chief Election Commissioner (CEC) Sukumar Sen to the present Commissioners but favoured a different method of choosing the Commissioners.

Speaking at a book launch function here, he said: "There is some doubt about the functioning of the Election Commission during these elections. There should be a different method of choosing the members of the Commission. There may be some viewpoints."

The opposition parties have attacked the Election Commission, accusing it of working at the behest of the Central government and surrendering its autonomy during the just concluded Lok Sabha polls.

They have also criticised the poll panel for giving a number of clean chits to Prime Minister Narendra Modi and BJP president Amit Shah on alleged violations of the Model Code of Conduct (MCC).