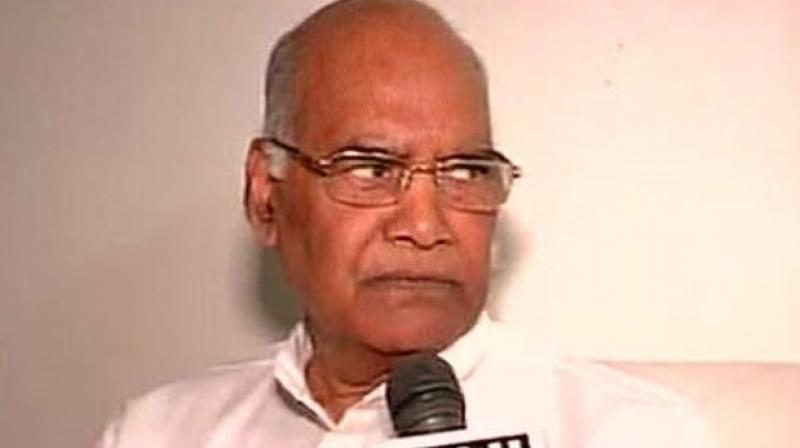 New Delhi: A day after he was named the NDA’s presidential candidate, Mr Ram Nath Kovind on Tuesday resigned as governor of Bihar, which was accepted by President Pranab Mukherjee. West Bengal governor Keshari Nath Tripathi was given additional charge as Bihar governor. Mr Mukherjee’s five-year term as President will come to an end on July 24.

Mr Kovind was accorded “Z-plus” security cover by NSG commandos by the Centre on Tuesday. He is likely to participate in the International Yoga Day event in New Delhi’s Connaught Place on Wednesday along with senior Union minister M. Venkaiah Naidu.

The numbers seem to be clearly in favour of the NDA candidate as some non-NDA non-UPA parties, including the BJD, YSRCP, TDP and TRS, have announced their support for Mr Kovind.

Mr Venkaiah Naidu on Tuesday reached out to more parties seeking support for Mr Kovind’s candidature. Mr Naidu, who is a part of the three-member panel set up by the BJP to consult other parties on the presidential polls, spoke to former PM and JD(S) leader H.D. Deve Gowda,

DMK’s M.K. Stalin, PMK’s Anbumani Ramadoss and PDP chief and Jammu and Kashmir CM Mehbooba Mufti. Mr Naidu also called BJD supremo and Odisha CM Naveen Patnaik to thank him for backing the NDA nominee and invited him for the filing of the nomination by Mr Kovind.

The BJP has also requested its chief ministers and allies to be present on June 23 when Mr Kovind files his nomination for the July 17 presidential election. Besides Prime Minister Narendra Modi, virtually the entire Union council of ministers, NDA chief ministers and MPs and MLAs from across the country will be among the proposers and seconders of his candidature.