Ajit Sahoo of 44 Rashtriya Rifles was killed when militants attacked patrol vehicle with an IED in Arihal village of Pulwama district. 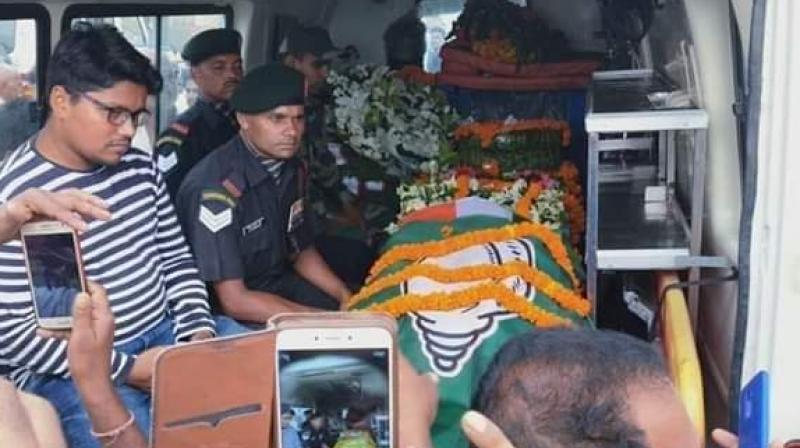 A few photos of the BJD flag on the jawan’s coffin went viral on social media on Thursday night and quickly triggered an outrage. (Photo: Twitter | @AmitabhMohanty9)

Bhubaneshwar: The ruling Biju Janata Dal has come under fire after some of its workers allegedly put the party’s flag on the coffin of the Indian Army soldier, who was killed in an IED attack in south Kashmir’s Pulwama.

Ajit Sahoo of 44 Rashtriya Rifles was killed when militants attacked the bullet and mine-proof patrol vehicle with an Improvised Explosive Device (IED) in Arihal village of Pulwama district. Six soldiers, including Sahoo, and two civilians were injured in the attack. Sahoo and one other soldier later succumbed to their injuries.

Sahoo’s older brother Parameswar said at Khuntuni some BJD workers put up the Green Party flag with the image of a conch on top the tricolour-draped coffin while offering flowers. He was accompanying his brother’s coffin to their native village of Badasunalo.

“I immediately removed it as I felt it was wrong. My brother was martyred for the country and not any party,” he told Hindustan Times.

A few photos of the BJD flag on the jawan’s coffin went viral on social media on Thursday night and quickly triggered an outrage.

Instade of #TriRanga Flag, @bjd_odisha party flag on martyr solder #AjitSahoo body, Such a #Shameful thing that we seeing in our #Odisha .

Condemning the incident, the BJD said the party has enormous respect towards martyrs.

“The matter that has come to our notice is extremely unfortunate and we strongly condemn it. The party will find out who is responsible for this and take the stringent action against them,” BJD spokesperson Sasmit Patra said.

State BJP also quickly responded to this and called it 'very unfortunate'.

Very unfortunate, politicising the death of an Indian soldier by the ruling party in Odisha draping his coffin with their party flag instead of the tricolor.

Request national media to call this out, & BJD to apologise & commit to never repeating it 🙏🙏🙏 https://t.co/Y70tdx5aJB

It is interesting to note that this is not the first time that ruling BJD has been in the centre of such a controversy.

In February this year, BJD leader and former MLA Debashis Samantray was strongly criticised after a video of his alleged manhandling of the relatives of a CRPF jawan killed in the terrorist attack in Pulwama district on February 14 went viral on social media.