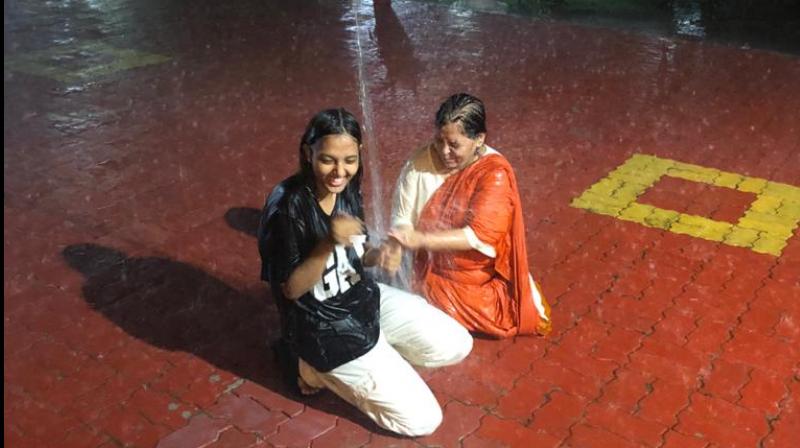 Bhopal: Former chief minister Uma Bharti, the ‘die-hard saffronite’, has literally set the social media on fire when she posted a picture in which she was seen romancing with monsoon rains.

The twitter post showing the saffron-clad leader enjoying monsoon rains trickling through a pipe from the roof of her official bungalow here along with her young niece has attracted 1,57,000 likes within a few hours.

“I enjoyed the monsoon rains leaking through the pipe from the roof under the open sky along with ‘beti’ (referring to her niece) Nitya. I thanked the god”, she tweeted while posting the picture of her rain bath.

The post was retweeted 796 times and commented by 174 followers within a few hours.

The 61-year-old ‘sanyasin’ also took the opportunity to wish good rainfall this monsoon and good harvesting by farmers of Madhya Pradesh.

The picture has incidentally stirred a flutter in BJP circle here amid growing speculations that she was trying to stage a comeback to MP politics by taking active role in the upcoming by-elections to the 27 assembly constituencies in the state, scheduled to be held by end of September this year.

In fact, Ms Bharti has of late been found touring MP very frequently giving rise to the speculation on her growing ambition to return to MP politics.

Besides, she has also been found to be engaging her in political activities in Bhopal in the last eight months.

Ms Bharti who led BJP to power in MP in 2003 assembly elections, had left MP politics after she resigned as chief minister of the state in2004.

She had represented Jhansi Lok Sabha constituencies in 2014 polls, but she decided not to contest the last LS polls.