D K Shivakumar is in practice of influencing the witness, ED tells court

The ED further said the analysis of the transaction and the sources is underway. 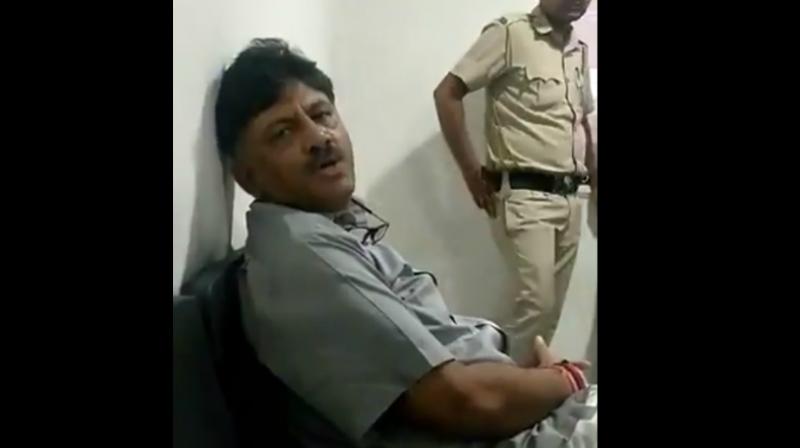 The Enforcement Directorate (ED) on Saturday alleged that jailed Karnataka Congress leader D K Shivakumar is in the practice of influencing the witness. (Photo: File)

New Delhi: The Enforcement Directorate (ED) on Saturday alleged that jailed Karnataka Congress leader D K Shivakumar is in the practice of influencing the witness.

In a special court of Judge Ajay Kumar Kuhar, ED while opposing the bail plea filed by Shivakumar in connection with a money laundering case, alleged that he was in the practice of influencing the witness, looking at the past conducts in I-T probe, some witnesses retracted also.

The ED said being an influential and powerful person, Kumar has in the whole likelihood to hamper the investigation.

ASG KM Natraj appearing for ED further submitted that many documents and material during both IT and PMLA probe have been recovered which draws a strong inference of commission of an offence. We need to take the investigation to a logical end. The source of laundered money and the proceeds of crime is being investigated, the ED said.

The ED further said the analysis of the transaction and the sources is underway.

"The probe is underway and it is at a crucial stage. He was non-cooperative and evasive during the interrogation. Article 20 and 21 grants right to silence but it cannot be done for non-cooperation," the ED said.

The ED has concluded its arguments.

Senior advocates Abhishek Manu Singhvi and Senior Advocate Mukul Rohatgi appearing for Shivakumar have strongly denied the allegation made by the ED.

The money laundering case was registered by the ED against Shivakumar in September last year, based on a complaint filed by the Income Tax department. The I-T department, during the initial probe, had allegedly found unaccounted and misreported wealth linked to Shivakumar.

The department had that stated it came across money laundering and hawala operations involving a network of persons across Delhi and Bengaluru.